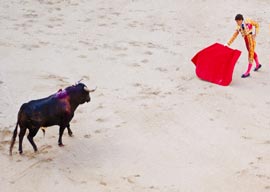 We shouldn”t be irritated when politicians utter absurdities “ they are only doing their job, after all “ but nevertheless we are irritated. Unfortunately, different politicians irritate different people. Pascal said that most of our problems arise from our inability to sit quietly in a room but I think that they arise mainly from our inability to agree as to what is absurd.

The other day I read an article in a French newspaper with the headline For a Free and European Catalonia. I knew at once that what followed must be drivel: an article under the headline For an Enslaved and Central African Catalonia would have been much more interesting, and would at least have had the merit of originality. Only something that is worth contradicting is worth saying.

The article was written by Artur Mas, President of the Catalonian Generalitat, a nationalist who hopes to lead Catalonia to full independence. Of course he was using the words “free” and “European” in a special, technical sense, that only a member of the political class could use. Towards the end of his article, Sr Mas writes:

This future Catalan state wants to remain part of the European Union: it will be loyal and trustworthy in its dealings with European institutions and governments. The Catalans, historically, have been enthusiastic defenders of the construction of Europe.

“But what is the point of nationalism without borders?”

The construction of Europe? The phrase is often used, but never with any reference as to what, exactly (or even approximately), is being constructed. It is as if the entire population of Europe were being invited on to a magic mystery tour, neither the destination nor the experiences en route having been specified. The population has merely to trust the drivers and the guides.

It is not very difficult, however, to discern the object of this construction, as politico-bureaucrats like Sr Mas like to call it. Indeed, there can be only one aim, one blueprint, for such a construction: a sovereign super-state that, given the modern tendency to centralisation, will leave the leaders of entire countries with fewer powers than governors of the American states, all the more so as many of the countries will, like Catalonia, be very small and hardly weigh in the balance.

All the nationalisms that threaten to break up long-established states “ Scottish, Catalonian or Flemish “ seems strangely in favour of ever-closer European union (another cant term for construction). Independence, however, makes sense only where there is a strong degree of sovereignty, but European construction or ever-closer union means ever-less sovereignty for national states until it disappears altogether. The nationalists appear to want to jump out of what they think is a frying pan into the fire.

In fact, their respective nations already have such autonomy as they are ever likely to be allowed in the new dispensation to which they claim to be attached. Scotland, Catalonia and Flanders have parliaments with considerable powers: and already one of the most apparent or noticeable borders in Europe is that between Wallonia and Flanders.

In his article, Sr Mas says that, because he is so pro-European, it would be ridiculous to accuse him of being in favour of the erection of borders. But what is the point of nationalism without borders?  In fact, there is such a point, but it is not one that speaks well of his ambitions and those of his supporters.

The European Union serves three main functions. It gives the French the illusion of power, the Germans a possibility of being something other than German and the political class of all European countries the hope of eternal life, or at least of power beyond the normal natural life of a democratic politician. It is a giant pension fund for European politicians.