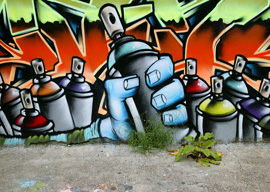 It’s 2012 in New York City and grown men are still writing their nicknames on everything. They come up with names such as Revok and Daim and vandalize other people’s property in a search for fame. They use etching cream to burn their name into a new restaurant’s glass windows or they”ll spend all night putting a huge mural on the side of a historic building. They tend to despise advertising and marketing and everything corporate.

Ironically, the hobby they”ve taken up is everything bad about marketing without any of the good stuff. They stick their brand all over the city and make sure it’s in everybody’s face, but they”re not even selling anything. At least Kraft is offering some cheese. All these guys are providing is “Me.” That’s it.

But what I find inspiring about this esoteric form of vandalism is that even graffiti artists, when they work hard and persevere, can become a success in this country. That’s how affluent we are.

KAWS is a “street artist” from Jersey who started out vandalizing ads by drawing a Mickey Mouse skull on them. People would pay money to get their ad on a billboard, and KAWS would destroy it. However, because he kept at it and worked tirelessly committing his crimes, advertisers soon paid to be destroyed by him. He’s done campaigns for Hennessy, designed shoes for Nike, and his sculptures sell for hundreds of thousands of dollars.

“In Singapore, graffiti gets you caned. In Australia you”re looking at two years in jail. In America, you get a career.”

David Choe is a friend of mine but he’s also a vandal and former street criminal. In the late 90s and early 2000s, he did so much graffiti in LA, he was known to virtually everybody under 30. When Mark Zuckerburg started Facebook, he had someone track down Choe to offer him cash for doing murals all over their office. David asked for equity instead and Zuckerburg gave him a paltry 1%, which is reportedly worth at least $100 million today.

There are a lot of theories on how modern graffiti became what it is today. I”ve been surrounded by these guys my whole life and this is my take: It started with inner-city kids in Philly living with a single mom in a house full of sisters and learning their values from these women. Single-parent immigrant families were all over the Northeast in the late 60s/early 70s and in Brooklyn, many of them were Puerto Rican. Most outsiders are shocked to walk through these neighborhoods today and see Puerto Rican men getting manicures and pedicures, but these men grew up in a dad-free culture. They primp and preen like women and spend hours and hours getting their hair done every week. These kids saw their sisters fawning over celebrities and decided fame was the most important thing in life. Without a father to say, “No it isn”t,” they invented nicknames for themselves and began writing them all over the city.

A Greek kid named Taki from 183rd St. spray-painted TAKI 183 around the city so many times, he ended up on the front page of The New York Times and a movie was made about his story.

As with all things cool, what starts in the inner cities is quickly adopted by middle-class white kids with dads, higher IQs, and a business plan. By the early 80s, they had turned nickname-writing into an accepted art form that led to gallery shows, marketing campaigns, and deluxe apartments in the sky. And that’s where we are today.