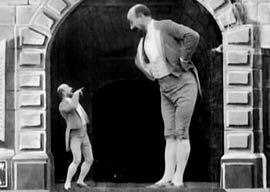 With all due respect to the Founding Fathers, I do not find it “self-evident” that all men are created equal. If anything, it appears bleedingly obvious that they are highly”even comically”unequal.

About a dozen years ago I gave a lecture in a Seattle bookshop packed to the mossy rafters with young, fresh-faced, presumably inquisitive alterna-individuals. As I was pontificating and blabbing and waxing smart-assed, I noted that the common myth currently binding American society together is the idea of equality, but the problem is that there is no evidence for it.

It was as if every jaw in the crowd dropped at once. They all looked stunned. Here was this sacred idea they”d unquestioningly swallowed, yet it had zero evidence to buttress it.

No one raised a hand to offer evidence.

Equality is one of the most ludicrous notions ever hatched from a human brain. But despite its self-evident falsehood, it is the closest our secular society has to a shared religious belief. It seems to exist not as an established and unquestionable fact, but mostly as a tranquilizer for the less-than-equal.

Your modern smug-as-a-bug-in-a-rug progressive egalitarian dimwit generally believes in evolution”except for the uncomfortable parts. Have you ever noticed that when you disagree with them about the notion of innate human equality, they immediately condemn you as innately inferior to them? In stereotyping the “racist””which is by far the most pervasive stereotype in modern society”it’s telling how often racists are depicted as stupid, subhuman, genetically inferior, and stuck in the Stone Age. It appears an indelible trait of human group psychology that people need to feel superior to at least someone, and that someone is currently the “racist” rather than the old standby, the Negro.

“I think the largest obstacle to equality is the fact that people aren’t equal.”

I like to at least pretend I have an open mind.

I yearn to look at spreadsheets that prove that Jews ‘n’ Japs aren’t generally smarter than other groups and that black people in no way tend to excel at the hundred-yard dash.

Would you be so nice as to prove to me that your average Russian chess master and your typical Maori tribesman would score equally on IQ tests if they’d only been brought up the same?

I really want racial equality to be a scientific verity rather than a well-meaning but possibly dangerous fantasy. I’m not joking. I want to believe in it, but I want some proof. Is that too much to ask?

But rather than bothering to cough up even a tiny slimy loogie of evidence to bolster what they insist is a fact that has been proved beyond question, egalitarians will trot out Lewontin’s Fallacy, which roughly runs thusly:

Differences within any group are greater than those between groups.

Against every known rule of logic, this statement is always used as some blanket proof of equality.

Here’s why the statement is deceptive: Differences between highs and lows WITHIN a group do not discount or magically wash away differences between group AVERAGES. Exceptions may disprove a rule, but they in no way undermine demonstrable patterns.

Keeping it simple, I”ll use a baseball analogy. Let’s say the best hitter for the Boston Red Sox bats .350. And, oh, let’s say their worst hitter bats .150. And let’s allege that the team’s batting average is .250.

So the difference between the Red Sox’s best and worst hitters is a steep 200 points, while there’s only 100 points between the teams’ averages.

Does this, even for a second, mean the Red Sox and Yankees are equal at batting?

Not if you aren’t a moron.

The Yankees, on average, still bat 100 points better than the Red Sox, and a betting man would be a fool not to put his money on the Yankees.

Notice how they never invoke Lewontin’s Fallacy when speaking of economic inequality?