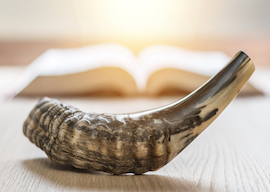 Another Passover come and gone. And with the weather getting warm and dry here in L.A., I’m gonna have to make sure to take down the tree before it becomes a fire hazard. We Jews don’t blow the shofar for Passover—that’s a Yom Kippur thing. In fact, to be honest, I’ve never blown a shofar in my life, although I have been known to tell one or two shiksa actress bimbos that blowing a shofar is a good way to land movie roles in this town (which has resulted in not just a few cases of very surprised, and very happy, limo drivers).

The shofar is, of course, a ram’s horn used by Jewey Armstrongs the world over to herald something or another. And even though Passover is not the time for shofar blowin’, I was reminded of the Hebraic party favor in the wake of the devastating fire that hit the Notre Dame Cathedral. The leftist press has unleashed a barrage of op-eds calling for the new Notre Dame to reflect new Europe with its new immigrants who create new slums and favor local women with new rapes.

The most viral of those pieces is a Daily Beast rant written by Erika Harlitz-Kern, a Swedish historian who teaches at Florida International University (Harlitz-Kern devotes much of her Twitter feed to defending the onerous Swedish tax system, yet she lives in low-taxes Florida. How odd!). Her essay is titled “Give Notre Dame a Modern Roof the Alt-Right Will Hate,” and can’t you just hear the sound of the Beast editors climaxing in their pants in anticipation of how many social media hits a title like that will guarantee?

The gist of Hurdy-Gurdy’s rhetorical smegma is…well, I’ll let Muppet Chef sum it up herself:

Medieval Europe was a crossroads of global influence, not a mythical all-white past. The new Notre Dame should reflect that…. Notre Dame’s new roof should be a representation of the architecture of the first decades of the 21st century, more in the spirit of the pyramid at the Louvre than the spire that no longer defines the Paris city silhouette.

Yep, screw any notion of Notre Dame as something sacred. The new Dame oughta be modern and multicultural. Those moronic white Christians who see this old hovel as something to be treated with awe and respect are merely fronting for white supremacy. Give Nouveau Dame a diverse, Eid al-Fitr kinda vibe!

Funny, but I seem to recall Harlitz-Kern taking a different position about a different sacred object several years ago. In 2014, she penned an essay for her personal blog in which she bravely announced that she was boycotting the TV show Sleepy Hollow. Why? Because one episode insulted the sacredness of the Jewish shofar. Apparently, some character named Henry summoned some villain named Moloch by blowing an ancient horn, and Harlitz-Kern was having none of it:

Moloch enters our world when Henry, in accordance to the Book of Revelations, sounds a trumpet. In ‘Sleepy Hollow,’ the trumpet that Henry sounds is in fact a shofar. A shofar is a ram’s horn used during the synagogue service on Rosh HaShana. In Judaism, the blowing of the shofar symbolizes many things. For example, it symbolizes the human heart calling to God and God hearing that call. The shofar also symbolizes calling for the future and the arrival of the Messiah…. The shofar symbolizes the close connection between the Jewish nation and God. When Henry blows the shofar to summon Moloch, the symbolism of the shofar is perverted…. The actions and words of Henry call upon centuries-old antisemitic prejudice and hate-speech towards Jews.

“Top Democrats desperately need Americans to forget that up until recently many of them were pro–border security and anti–illegal immigration.”

Harlitz-Kern concluded her piece by calling Sleepy Hollow “one of the most racist shows on American television.”

So, Notre Dame is not sacred (and those who see it as such are “alt-rightists”), and the cathedral should be updated for today’s edgy, multicultural times. But the shofar is sacred, and must never be used in a context that alters its original meaning.

When it comes to preserving history, the left—as it does with everything it lays its bong-water-soaked hands on—uses race as the arbiter. Shofars? Sacred, because Jews. European cathedrals? Not sacred, because whites!

All remnants of Confederate art must be removed and erased because the South fought a war against the U.S. government (“We should not commemorate our former enemies!”). Yet the National Park Service vigorously advocates the preservation and exhibition of art created by Mexicans who fought against the U.S. during the Mexican-American War (“Let’s commemorate our former enemies!”). To leftists, it all comes down to this: Question: “Should we preserve the art of those who fought against us?” Answer: “Depends. Here’s a brown paper bag. If the artist’s skin is this color or darker, yes! If not, no!”

Notorious B.I.G. rapped, “Can’t talk with a gun in your mouth, huh? Bitch-ass nigga, what?”

Give him a statue!

These days, erasing history is the left’s favorite pastime, because leftists understand the link between controlling the knowledge of history and controlling current events. Respecting Notre Dame’s past, acknowledging the religion and race of the folks who built it, mucks up the grand plan to create a multiracial Europe. Remember that viral story about how England’s “first humans” were black? Remember how it was covered again and again in the press? Remember when it was debunked? Probably not, because almost none of the initial breathless stories were updated or corrected. The phony “charcoal Cheddar Man” claim is necessary for the left’s narrative. “Why, England’s always been black! African immigration is simply folks comin’ back home.”

Defile a historic cathedral to promote multiculturalism, or defile some old bones for the same reason. To the left, it’s just another day at the office.

But let’s move away from ancient history. What’s fascinating is how leftists have mastered the art of erasing recent history.

With the 2020 primaries taking (mis)shape, top Democrats desperately need Americans to forget that up until recently many of them were pro–border security and anti–illegal immigration. The thing is, when leftists reverse themselves, they never own up to the reversal. They simply change their position to the one most popular with the screamiest meemies in their base, and then they have their friends in the press bury the old position (with an assist from their friends in Big Tech, who declare the old position “hate speech,” meaning that no one gets to rehash what the leftists were saying less than a decade ago). “Stop illegal immigration!” “No gay marriage!” “There are only two genders!” Hey—we never said that, and if you try to bring up the fact that we totally did say that, kiss your social media presence goodbye, racist!

During an appearance on PBS’ Firing Line With Margaret Hoover last week, Ann Coulter suggested that she might consider supporting Bernie Sanders for president if he returned to his original anti-open-borders position. Well, this presented a conundrum for the press. Ann Coulter willing to support Bernie Sanders? Social media gold! But…how to tell the story without revealing the fact that Bernie-boy used to be in favor of border control? Simple! Just erase the history. “Ann Coulter says she could vote for Sanders if he changed views on immigration,” screamed The Hill. “Coulter said she would vote for Sen. Bernie Sanders for president, and even consider working for him, if he changed his position on immigration. If Sanders changed his immigration stance to include policies such as ‘protecting the border’ he would have Coulter’s vote.”

See what they did there? Changed his position…not “went back to his original position,” which was Coulter’s actual quote. Because it’s vital to erase the history of Sanders’ previous views on immigration. After all, bringing it up might force him to explain the shift, and we can’t have that, can we?

A few days ago, Kamala Harris, a.k.a. the background dancer who screwed her way to lead singer, was asked by Don Lemon if she supported Sanders’ plan to allow murderers and rapists to retain their voting rights while in prison. “I think we should have that conversation,” said the former “prosecutor.” When I saw the clip, I honestly didn’t mind the evasive nature of her answer. Politicians are evasive by nature; it comes with the job. What pissed me off was the idea that leftists ever engage in a “conversation.” When do leftists ever engage in “conversations”? They adopt a position (often a complete reversal of a previous one), and then they declare the old position to be “hate speech” and those who espouse it “hate criminals.” Where was the “conversation” on trannies in the girls’ bathroom? Where was the “conversation” on there being 1,745 genders instead of two? I don’t recall having those “conversations,” do you? One day, leftists decided that “this is the new truth,” and suddenly people like me get banned from social media for stating the scientific fact that a man can’t wish himself into being a biological woman.

If there was a “conversation,” I don’t remember it.

Affirmative action? Forced busing? Court ordered…no “conversation.” And if Democrats, who view voting rights for imprisoned murderers as a race issue (because of the disproportionately high number of blacks and Latinos who’d be affected), decide tomorrow to uniformly support that policy, overnight anyone who opposes it will immediately become Hitler.

Did any Western European leaders have a “conversation” with their constituents about flooding the continent with nonindigenous immigrants? When exactly was that referendum? At least with Brexit, there was a conversation, but has the popular consensus—the result of that conversation—been respected? Of course not.

Leftists don’t “converse.” They impose. And to do this, it often becomes necessary to erase history, ancient and recent. This is done not only to cow the current generation, but to brainwash the next. “Why, Notre Dame always had a minaret! Hell, the building was constructed by Muslims, who were always the majority in France! Just as England was always nonwhite.”

Future Europeans will learn little of old Christendom, but you can be damn sure they’ll know all about Auschwitz. In thirty years, every schoolkid in the West will know about the fifty Muslims killed in New Zealand in March 2019, and none will know of the hundreds of Christians killed in Sri Lanka a month later.

Controlling what we forget and what we remember, what we are encouraged to defile and what we are ordered to hold sacred (like Harlitz-Kern’s holy kazoo), is how you make sure there isn’t a conversation. Leftists understand this better than anyone.

If Stalin taught these bastards anything, it’s that the airbrush is mightier than the memory.