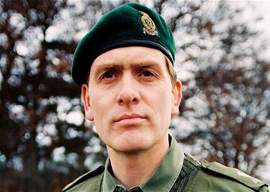 On Tuesday February 22nd, police were called to the Strangers” Bar in the House of Commons to remove a man who had allegedly gone berserk, assaulting several others and breaking a door. The alleged assailant was 51-year-old Eric Joyce, Labour MP for Falkirk. His victims were mostly Conservative MPs”AKA “f***ing Tories,” as Joyce reportedly called them immediately before launching into his hands-on debating style. The former judo champion was fair-minded enough to extend the horseplay to a Labour colleague who intervened to restrain him. Joyce was removed to Belgravia Police Station for 24 hours until he felt less tired. The following day he was charged with three counts of assault and suspended by Labour. It was a mother of a scuffle for the Mother of Parliaments”an unfortunate and undignified affair for someone once seen as a potential PM.

His political career had started so promisingly, too, with a mass denunciation of friends. After an army career starting as a private in the Black Watch and ending up as a major in the Education Corps”a rare peacetime accomplishment, especially as he was given lengthy sabbaticals”in 1997 he suddenly realized he had always despised his comrades. He authored a Fabian Society pamphlet called Arms and the Man, the “outspoken” premise of which was that soldiers were white, male, racist, etc. His sally was greeted with some disfavor and he was threatened with dismissal, after which nothing happened for 18 months while the Tories murmured the government was protecting him. And as good luck would have it, the honest major was soon on a list of approved Labour candidates. He also worked in public relations for the Commission for Racial Equality”more Black Watching, you could say. As the Daily Record commented, more in sorrow than spleen, he was viewed as

…a bold leader with a bright future, [and] his square-jawed, military bearing and smooth-talking style made him ideal material….

“It is impossible to do justice to the depth of his thinking. In fact, some of his communications are beyond comprehension.”

Since ex-soldiers with theology degrees are almost as rare among Labour MPs as ex-social workers with AIDS are among Tory MPs, he was elected as expected. He worked for several ministers, including Defence Secretary Bob Ainsworth”although he resigned over Afghanistan. He edited a stirring work entitled Now’s the Hour: New Thinking for Holyrood and served as Chair of the National Executive of the Fabian Society, helping them to promote “an accountable, tolerant, and active democracy.”

He racked up hugely impressive titles”Chairman of the Great Lakes Africa All-Party Parliamentary Group, Vice Chair (digital) of Parliamentary Internet Communications and Technology Forum, and Vice-Chair of the All-Party Parliamentary Group on Skills. It will therefore come as no surprise to learn that our Eric is one of politics” preeminent Tweeters, messaging incessantly on important subjects even during Prime Minister’s Questions. It is impossible to do justice to the depth of his thinking. In fact, some of his communications are beyond comprehension:

OK, who’s the hardest boxing correspondent in the country? Only one way to find out…

head in oven, feet in fridge; overall quite comfortable?

No discussion? Then you are truly pathetic. Where’s your wind? Arse.