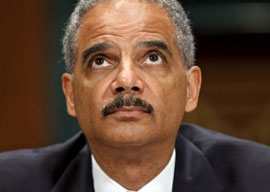 The House Oversight Committee voted last week to begin Contempt of Congress proceedings against porpoise-faced Attorney General Eric Holder. Although the vote was a reaction to Holder’s stonewalling in the Fast and Furious gun-walking scandal, America’s wormy, mustachioed AG has shown flagrant contempt for the popular will during his entire tenure. With ghastly consistency, he has enforced laws that appeal to his radical progressive agenda and ignored the ones he doesn”t like.

Only two weeks after being sworn in as Attorney General, Holder called America a “nation of cowards” regarding racial matters. Way to get started on the good foot and charm the socks off the heartland, fella! The only cowards I see are the spineless geeks terrified of being called “racist” and the yella-bellies who are morbidly afraid of honestly examining other explanations for disparities in crime and income besides ye olde bugaboo of “racism.”

Although the story has largely been suppressed by the leftist media’s barking megaphones, Holder’s racial double standards were made evident in his refusal to prosecute the New Black Panthers in Philadelphia for voter intimidation during the 2008 presidential election. Department of Justice attorney J. Christian Adams had claimed, “I was told by voting section management that cases are not going to be brought against black defendants on [behalf] of white victims.”

Holder’s response to the hubbub revealed his ethno-nationalist sympathies:

“The problem here is that ‘his’ people aren’t really ‘the’ people”i.e., the majority of people.”

When you compare what people endured in the South in the “60s to try to get the right to vote for African Americans, to compare what people subjected to that with what happened in Philadelphia…I think does a great disservice to people who put their lives on the line for my people.

In truth, his “people” consisted of a father born in Barbados and a mother whose parents were born in Barbados. So his “people” were not related to anything that transpired in the American South during or after slavery”nor, to be blunt, with any of the people who were around when the United States Constitution was drafted. To be blunter, if any average ofay American lawyer or politician had gone on record defending their “people,” that person’s career would be stomped dead like a roach. So when Holder said “my people,” he meant those people”the ones you can”t call “you people” the same way you”re forbidden from calling your own people “my people.” The problem here is that “his” people aren’t really “the” people”i.e., the majority of people.

Testifying in favor of 2009’s Matthew Shepard and James Byrd, Jr. Hate Crimes Prevention Act, Holder explained that the law would not cover a Christian minister being attacked by a gay activist because Christian ministers were not one of the “protected groups” whose persecution had a “historical basis.” Although Holder was historically wrong to an absurd degree, it didn”t seem to matter.

Even though large majorities of Americans supported Arizona’s SB 1070, in 2010 Holder’s Department of Justice challenged the law as unconstitutional in federal court. Holder raised the presumably fearsome savaging of fundamental human rights that would occur should a person who looks Mexican, doesn”t speak English, has no identification, and is huddled with eight others in the trunk of a ‘72 Monte Carlo that just crossed the border be “racially profiled” as Mexican. Holder has set his paper-pushing attack dogs loose to fight similar laws in Utah, Alabama, and South Carolina. He argued that federal law trumps state law in such matters, ignoring the fact that he has failed to prosecute a single “sanctuary city” that openly flouts federal immigration laws.

Despite his professed obeisance toward federal laws, Holder has said his DOJ would cease to defend the federal Defense of Marriage Act that defined marriage as a union between one person with a penis and another person with a vagina. This was despite the fact that in the 32 instances where Americans have been offered the opportunity to vote for gay marriage, they shot it down all 32 times.