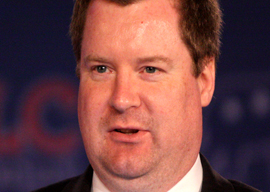 There are many things to enjoy about Donald Trump’s unlikely climb to the head of the Republican Party. The media outcry, the resurgence of America First policy, the internet memes.

Not only is Donald a mensch on stage, but the reactions he elicits are priceless. I say priceless because they provide an inside look into who his critics really are. “You can always judge a man by the quality of his enemies,” as the saying goes.

Take former RedState editor Erick Erickson. A dedicated Never Trumper, Erickson has pledged never to vote for the brash businessman. This is from the same guy who demands readers support Republicans, no matter how liberal or ineffective.

“”You can always judge a man by the quality of his enemies,” as the saying goes.”

Trump’s broadsides against the neoconservative, free-trade orthodoxy of the GOP are too much for Erickson. The apogee came when, in one of his barnstorming rallies, Trump put the North Atlantic Treaty Organization (NATO) in question. When faced with a hypothetical Russian invasion of an Eastern European country and NATO ally, will the U.S. meet its obligation to protect the defender? Trump’s no-bullshit response: “I say, well, let me ask you, have they paid?”

What he means is, has the country being aggressed against paid what it’s contractually obligated to pay for collective defense? According to The Wall Street Journal, only five of the 28 NATO countries meet their spending obligations. Uncle Sam and Merry England are expected to cover for the shortfall and defend the pact.

Trump’s NATO skepticism set off Erickson like a cat getting its tail crushed in a door. “Donald Trump Can Go to Hell and If You Defend His Statement, So Can You,” ran a headline from his website. “These are friends. Our promises do not require shakedowns,” he declares. Citing the support of NATO countries after the 9/11 attacks, Erickson goes further, saying Trump “can go to hell” and “perhaps [his supporters] will do the rest of us a favor and follow him there.”

To sum it up: If you think that America should keep her promises, and that same standard should apply to all countries, then go straight to perdition. Do not collect $200.

That’s a wee bit uncharitable for a man in seminary.

Since his tantrum, Erickson has issued a mea culpa, writing, “Trump brings out the worst in everybody, including in me,” and that he is “bad for my sanctification.”

That last part is richer than a slice of peanut butter and Ghirardelli chocolate cake”namely because Erickson needs a good dose of holy water to clean out his dirty mouth.

This is far from the first time he has gone off the rails. The outspoken blogger has a history of making outrageous statements”many of which are actually funny and contain a kernel of truth. He once called former Supreme Court Justice David Souter a “goat f*&king child molester.” He told CNN that if a census worker ever showed up at his front door, he would grab his wife’s shotgun and “see how that little ACS twerp likes being scared at the door.” When Texas state senator Wendy Davis filibustered an abortion restriction bill, Erickson tagged her as “Abortion Barbie.”

Through all the crazed utterances, Erickson still has enough guile to decry others who borrow his shtick. Matthew 6:14 consistently slips his mind. Erick, holy man that he is, has his own catechism for The Donald: Provocation for me, not thee.