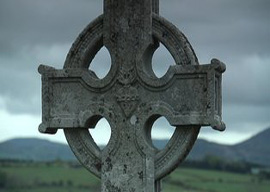 The recent news concerning the Irish government’s decision to close its embassy to the Holy See in Rome is yet another indicator of how petty and nasty the mental and moral midgets in Dublin’s Government Buildings really are. Spearheaded by Taoiseach (Prime Minister) Enda Kenny, it is akin to his speech attacking the Vatican for the Irish Catholic Church’s pedophilia problem and his stated intention to break the seal of the confessional to convict priestly child molesters (though not, one supposes, for crooked politicians). To be fair, Kenny appears to have given up on the latter issue; this is just as well, for if he continues, what opposition he has will be able to point out that as Blair followed Hitler on hunting, so the clueless Taoiseach would emulate der Führer and try to break into the confessional. Nevertheless, the whole shifty affair points out what the Irish Republic has become.

“Under this new dispensation, Ireland has suffered under not one but two colonial powers: England and Rome.”

I love Ireland and the Irish. Many times have I been there and enjoyed a good “craic.” I have been in most of the country from Kerry to Antrim, and I love her beautiful landscape, scarred as it is by her often tragic history. That history has produced no end of heroes, from the mythic Fianna and the Red Branch Knights, through the Flight of the Earls, the Confederacy of Kilkenny, the Irish expression of Jacobitism and the Wild Geese, to Daniel O’Connell. Including the Orangemen, who have their own (and in its own way, stirring) narrative, Irish historiography of events from the 19th century onward splits into several streams: Nationalist versus Catholic Unionist, Treaty versus Anti-Treaty. These latter two gave birth respectively to two alternative sets of heroes—Michael Collins and Kevin O’Higgins for the first, and my fellow New Yorker Éamon de Valera for the second. They also spawned the country’s two major political parties, Fine Gael and Fianna Fáil.

Despite their often bitter enmity, what the latter two had in common was a belief in Catholicism as the foundation of Irish identity. But the 1960s hit Ireland as much as anywhere (albeit slowly), and the generation now in power is the same as that which haunts the rest of the developed world: the Baby Boomers, or as the Europeans call them, the “Generation of ’68.” Forever in love with their own youth, they despise all that came before them. In Britain and the Crown Commonwealth, this current creates republicans; in Ireland it has created a new historical narrative dating all the way back to the 70s. Under this new dispensation, Ireland has suffered under not one but two colonial powers: England and Rome.