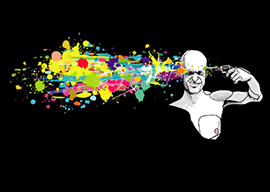 Well, not really a musical, nor even the lyrics to a musical. The piece under discussion is, though, definitely not plain prose; so musical-wise, we have the beginnings of a start here.

I am referring to Tim Wise’s furious rant on Daily Kos the other day under the title “An Open Letter to the White Right, On the Occasion of Your Recent, Successful Temper Tantrum.” Mr. Wise”“Uncle Tim” to us race-realists”let loose on the old white reactionaries who, according to him, were responsible for so many Republican victories in the elections. You can read the whole thing here.

Uncle Tim’s thesis is that the election results were an Old America’s death spasm. This Old America is slipping away, but those who cling to it are putting up a rearguard fight. Their cause is hopeless, though, and before long they will have disappeared, replaced by a New America.

What was it like, this old America that’s passing away? Well, it was white, or at least white-dominated. TV sitcoms were all about white people reveling in their whiteness. For colored people, Old America was a living hell where they “could legally be kept from voting solely because of race, or holding certain jobs, or living in certain neighborhoods, or run out of other towns altogether when the sun would go down, or be strung up from trees.”

And what will the New America be like? Tim tells us gleefully that “half the country will be black or brown,” all of them of course “progressive.” Enough of the white minority will also be “progressive” to ensure that the evil, reactionary Old America never comes back.

In a way it’s all very quaintly American. What came to my mind when reading it was Charles Mackay’s grand old uplifter “There’s a Good Time Coming”:

In his footnote to this poem, Michael Turner remarks:

This brave and very touching work confirms…the unshakeable nineteenth-century faith in the benign workings of Providence, in the certainty of Progress. The prophecies of the fifth and sixth stanzas have largely come to pass in Britain and America; we must continue to wait for the rest.

How true. Certainly, to judge from the timbre of Uncle Tim’s post-election rant, we are still some way from a time when “The people shall be temperate, / and shall love instead of hate.”

“The full-blown modern style of ethnomasochism is, like many other psychosocial pathologies, a product of Anglo-American progressivism.”

Uncle Tim has the demographics pretty much correct, though. No less an authority than the Census Bureau tells us that whites will be a minority in the U.S.A. by 2050. Whether Tim has the rest of it right”whether, in particular, his millenarian dream of harmony and justice in a majority black-‘n’-brown U.S.A. will come true”is a different matter. The curricula vitarum of black and brown nations do not offer much encouragement.

The world would be a happier place without racial and ethnic antagonisms. But as disagreeable as these phenomena are, they have shown up all through human history wherever different peoples have mingled. This suggests that they are rooted in human nature.  That they will disappear as those who remember Leave It to Beaver die off seems improbable.