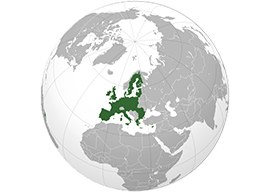 When communism collapsed in Moscow, Prague and Belgrade at the end of the Cold War, ethnic nationalism surged to the surface in all three nations and tore them apart into 24 countries.

Economic nationalism is now resurgent across Europe. And it is hard to see how a transnational institution like the European Union, run by faceless bureaucrats, and the 16-nation eurozone it created long survive.

As of Monday, Greece and Ireland had been bailed out—Greece with $145 billion, Ireland with $89 billion. All eyes have now turned to Iberia, to Portugal and Spain, where bond prices are sinking and interest rates are rising, and investors are eying the exits.

Monday’s stock and bond sell-off across Europe testifies to a belief that this storm is far from over.

Why cannot a series of bailouts, cobbled together by the EU and International Monetary Fund, contain these serial crises?

Two reasons: populism and a return of economic nationalism.

Consider two telling comments from the Irish about the terms of the bailout of their country.

“(S)enior bank bondholders are to be protected, while the lowest paid and those most vulnerable people dependent on public provision are to be crucified,” said trade union leader Jack O’Connor.

“Why not break free of the discipline of the euro, restore the old national currency, devalue and stiff the creditors? Argentina did it.”

“I think the government should default on the bonds,” said writer Valerie Wilson. “We are suffering so the bondholders don’t suffer. It’s capitalism gone mad.”

Angela Merkel, whose Germany is fronting much of the bailout money, has been demanding that bondholders take a haircut—lose some of the face value of their bonds—in all future bailouts.

Sunday, the EU agreed to consider it for all bailouts after 2012. But we may not get there before nervous investors decide to dump their bonds first and the European house of cards comes crashing down.