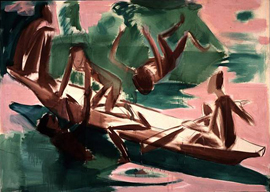 The world beyond our shores seems to be entering a zone of dangerous instability. Five years from now we may be looking back nostalgically at the decades 1980-2010 as an age of blessed tranquility when unsightly but skillful autocrats such as Mubarak (Egypt), Gaddafi (Libya), Ben Ali (Tunisia), Saleh (Yemen), and the Gulf’s monarchs kept their hungry, unemployed, and proliferating populations well suppressed.

Turmoil in these places is very bad news, and not only for the effect on oil prices. Real social collapse across the Maghreb / Mashriq (hereinafter “M/M”) belt could unleash great population movements, posing both political and ethical problems for Europe and North America.

We have already had reports of Tunisian refugees by the thousands setting sail for Italian territory. Libyans have been fleeing sideways into Tunisia and Egypt, but it may soon dawn on them, too, that Europe is a much more attractive destination. EU bureaucrats are all in a flutter as to how they would cope with a full-scale Camp of the Saints scenario.

“If continuing disorder in North Africa coincides with a world economic crisis, we might enter a spell in which, for the first time since the Middle Ages, history is driven by great movements of primitive peoples.”

Things are dire in these Sub-Saharan African nations. With ballooning populations putting more and more pressure on resources, things will get worse. Whether aid from the advanced world has been a help or a hindrance to these nations is much debated; but if the aid-giving nations get stuck in a long recession, as seems likely, we shall find out. (”Foreign aid tops the list of programs that most [Americans] would like to see cut.”)

These North African nations that have been boiling over this past few weeks are a great “berm,” a dike protecting Europe from hundreds of millions further south who face dwindling food resources and dysfunctional governments. Sub-Saharan Africans have been drifting up into the northern nations for decades: Libya is already 15-25 percent Sub-Saharan African. Many of Libya’s Africans would like to move on to Europe, and Gaddafi has taken billions in bribes from Italy to prevent their doing so: