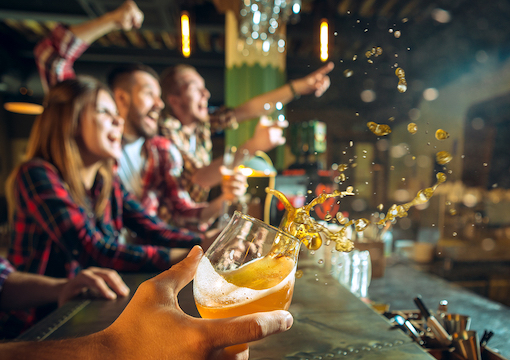 There are few sounds more frightening than that of the English young enjoying themselves. The English, it was once said, take their pleasures sadly; but now they take them loudly, which is far, far worse. Their pleasures are brutish, and the sounds the men emit while experiencing them are indistinguishable from those of a mob indignantly beating someone to death. As for the women, they never speak but they scream, as if being chronically raped. Of course, they all have to raise the level of their vocalizations because there is the perpetual background throb and thump of background music, or para-music, turned up to maximum volume, so that the ground vibrates beneath you like a ripple bed in an intensive care unit.

Recently I stayed overnight in a charming small cathedral city in England, genteel by day and Gomorrah by night. It is a little like H.G. Wells’ story The Time Machine, set 3,000 years hence, when humanity has divided into two: the effete, gentle, vegetarian diurnal Eloi, and the ugly, vicious, carnivorous nocturnal Morlocks, who emerge from underground once the sun goes down and prey on the Eloi.

I had booked no place to stay until the last minute, and found only a room above a cavernous, darkened bar, for me an antechamber of Hell, where the Morlock youth of the cathedral city gathered to enjoy themselves—or at least to pretend to do so, for I have long thought that those who cannot enjoy themselves without shouting and screaming are really hysterics, trying to convince themselves that they are enjoying themselves when actually they do not really know how to do so.

The room—which was surprisingly comfortable and well-appointed—was accessible only through the cavernous bar, entry to which was guarded by a bevy of large men dressed in black uniforms. They had earphones and shaved heads. They were of substantial size, both muscular and fat; they were, of course, tattooed. They were, I imagine, men who knew from experience both sides of a riot, that is to say of creating and quelling one. Their eyes scanned their narrow horizon for trouble, which they expected to break out at any time.

“Occasionally, there would be a scream of laughter, but the kind of laughter that could easily turn nasty.”

They controlled a line of young men who seemed almost desperate to gain admittance to the Hell-bar. To do so was the high point of their existence. The men in black, whose power was absolute, demanded to see their ID; the postulants to admission were crossing a border, and the rule was: No ID, no entry. It was not first come, first served. If the men in black recognized a regular, or a friend, or perhaps someone who had slipped them a little something, they let him in out of turn. Some they frisked, to check they were not smuggling in a bottle, for drink in Hell was expensive. One of the reasons for the loudness of the music in such places is to prevent speech and promote drinking.

The men in black recognized me at once as someone who was not out to cause trouble; troublemakers, at least of the type common in such bars, do not usually wear tweed coats, nor are they of my age (even psychopaths moderate with the passage of time). Although these men had hard faces that spoke of mistrust of and contempt for humanity, they were extremely polite and even friendly to me. I was reminded of what a policeman, who was taking early retirement, said to me. “In the old days,” he said, “we was nice to the nice people, and we was nasty to the nasty people.” Now that the police were professionally obliged to be nice to everyone, he said, he could no longer stand the work. The strain of exercising no discretion was too great. The men in black showed me to my room.

The walls of the darkened, cavernous bar were plentifully arrayed with large television screens, all relaying something different, all of it swift-moving but soundless. There was a lot of cavorting, but no one was watching. Ceaseless movement was to the visual environment what air was to the environment. It might have produced an epileptic fit or migraine in the susceptible; it had the effect on the mind of a food mixer on vegetables.

There were more men than women in the bar, mainly dressed in black, while the women were both scantily and tightly dressed, irrespective of the shape and size of their bodies. The men did not invite eye contact, which they would have construed as a challenge. I presume they were in competition for the attention of the women.

Once in my room, I could hear the bar below, mainly as an angry buzz, like a beehive under attack, though with the constant throb of a bass to accompany it. Occasionally, there would be a scream of laughter, but the kind of laughter that could easily turn nasty. I managed to go to sleep.

Whether because of the noise or the call of my bladder I cannot tell, but at about two in the morning I woke. There was evidently some kind of dispute going on in the bar. There was an angry hubbub above which a single word rose repeatedly: focking. No other word was distinguishable to me.The dispute continued for some time, so angrily and loudly that I feared someone might be killed. After what seemed like an eternity, it ended; I assumed that no one was badly injured, for neither police, who these days in England look increasingly like well-equipped bouncers (though they are less effectual than bouncers), nor ambulances had been called. The better class of bouncer, I read on a website devoted to the activities of this profession, will call an ambulance after injuring you.

After daybreak, civilization was restored. The eggs Benedict for breakfast were excellent. The waitress could not have been more obliging.

Still, the scenes of the night before haunted me. What if some evil genius arose to organize the black-clad bouncers and their black-clad clients—the young men desperate for admission—politically? What if an economic crisis caused such establishments to close? What then? I avert my mind from the thought.