Everyone’s Urinating on the Dossier Now! 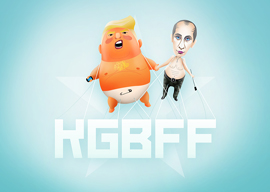 I was minding my own business reading about Bob Woodward, the GREATEST INVESTIGATIVE REPORTER IN THE HISTORY OF OUR REPUBLIC (as he will be the first to tell you), and came across this bit of genius from his book. According to The New York Times, Woodward is flabbergasted that former FBI Director James Comey released the Russian dossier, when he had the “airtight” report of 17 INTELLIGENCE AGENCIES.

Woodward writes: “It would be as if I had reported and written one of the most serious, complex stories for The Washington Post that I had ever done, and then provided an appendix of unverified allegations. Oh, by the way, here is a to-do list for further reporting and we’re publishing it.”

You will know, if you have read a much better book* about the Trump hysteria, Resistance Is Futile! How the Trump-Hating Left Lost Its Collective Mind, that, eventually, this is what the Resistance says about every part of the Russian collusion story. Oh, that old yarn? Yeah, we hysterically oversold that one, but maybe you’d be interested in this other scandal we tried pushing a few months ago!

(*Thus, according to the Times: “Woodward has never been a graceful writer, but the prose here is unusually wooden.”)

The Russian collusion story isn’t a story at all, but a constantly changing kaleidoscope with the same glass panes appearing, disappearing and then reappearing under the same headline: RUSSIAN COLLUSION PROVED! Each time, we’re supposed to pretend it’s an all-new “breaking news” story that hasn’t been disproved six times already.

“Until Trump won the election, even the media laughed at Hillary’s claim that Russia hacked the DNC to help Trump.”

Among the kaleidoscope panes are:

Carter Page went to Russia! (But unlike Bernie Sanders, NOT on his honeymoon — ed.)

The GOP platform on Ukraine was changed!

Of all these, it was the dossier that dominated the news for most of Trump’s first year in office. Here was the proof that Trump was owned by the Russians. The dossier had to be true — it just had to be!

Then, suddenly, 10 months later, that kaleidoscope pane completely disappeared. The dossier was an irrelevancy, a red herring, a conspiracy theory, a misnomer. Why do Republicans keep talking about the dossier?

Extra credit if you remember why the dossier got dropped like a hot potato in October 2017.

ANSWER: After lying to the public all year about the dossier being funded by a “Republican donor” — just a random concerned citizen! — a judge finally forced the media to cough up the truth: The dossier was bought and paid for by Hillary Clinton — deviously, of course, using a law firm to pimp for her. The Clinton campaign and the Democratic National Committee had paid $12 million for that dossier.

But during the 10 glorious months before we found out that the Russian dossier was nothing but Hillary’s oppo research, the media stamped their feet and demanded that we all swear to believe the dossier.

They deny this now, but I have Nexis.

With every other proof of Russian collusion discredited (except the actual collusion by both Hillary and the FBI), now they’re apparently going back to the 17 INTELLIGENCE AGENCIES!

The 17 INTELLIGENCE AGENCIES gag is what liberals do whenever they have no evidence, no facts and no argument. They cite a surprisingly large, but meaningless, number.

Three thousand scientists agree there is man-made global warming! (On closer examination, most of the “scientists” are ACLU lawyers.)

President Trump has made 4,713 false or misleading claims! (Actually, only two: That bombing Syria was in America’s “national security interest” and “we’ve already started building the wall!”)

The allegedly “airtight” report of 17 INTELLIGENCE AGENCIES was not what anyone would call “airtight.” In fact, it was kind of the opposite of “airtight.” Scratch the part about “airtight.” It could more accurately be described as a “complete joke.”

Russian scholars scoffed at it, cyber-security experts said it was impossible to know who hacked the DNC, and intelligence veterans churlishly pointed out that the report contained not a speck of evidence. Until Trump won the election, even the media laughed at Hillary’s claim that Russia hacked the DNC to help Trump.

President Obama took the claim that Russia had hacked the DNC so seriously that he boldly told Vladimir Putin to — I quote — “cut it out.”

In lieu of evidence, the report merely asserts conclusions. It reads like a stiffly worded, bureaucratic version of Hillary’s talking points:

We assess that president-elect Donald J. Trump has said degrading things about women in the past.

We further assess that president-elect Trump will continue to develop capabilities to fat-shame women in the United States, judging from past practice and current efforts.

Maybe it’s time for the Resistance to wheel out the one about Sessions meeting the Russian ambassador again.