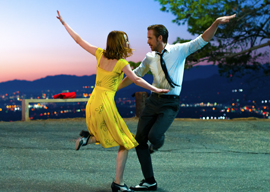 Will the curse of Oscar front-runnerhood undermine public enjoyment of La La Land?

It would be delightful to stumble unwittingly upon this old-fashioned movie musical about a romance between an unemployed actress (Emma Stone) and an underemployed jazz pianist (Ryan Gosling) in contemporary Los Angeles. But in this century, Oscar voters have tended to fall loudly in love with one moderately budgeted quasi-experimental movie each year, which then raises expectations for it too high.

For example, a half decade ago the Academy decided weeks before The Artist was even released to reward that modest little silent film with the Best Picture statuette, thus pretty much ruining the black-and-white film for everybody else when it, inevitably, couldn”t live up to the hype. Similarly, the odd Birdman and the slightly cheesy Slumdog Millionaire would have been more fun to discover on your own than under the Academy’s august auspices. (Personally, I like it better when the Oscars reward an overdog movie such as The King’s Speech or The Departed.)

This year the favorite is La La Land.

The musical is more romantic than young director Damien Chazelle’s previous film, the hard-edged Whiplash, about the competitive relationship between a Juilliard-student jazz drummer and his demanding professor, played by J.K. Simmons.

“Nobody, including me, is letting the film sneak up on audiences.”

Simmons is back in La La Land in a small but familiar role as the white male authority figure who has to make sure the system keeps working. In this movie, he plays the manager of the Smoke House, a Burbank restaurant my parents started going to when they got married in 1946. He fires Gosling for stubbornly playing avant-garde bop instead of the agreed-upon Christmas carols.

Chazelle is the son of an American history professor and a French computer science professor at Princeton. (Being half French and half American, in the tradition of Oliver Stone, seems like a good cultural background for a film director).

He realized he didn”t quite have the chops to be a professional jazz drummer, but he’s got plenty of rhythm for directing. Having no rhythm myself, my overall impression is that rhythm is the basis of all success in the arts.

The movie industry has become as enamored of Chazelle as theater is of Lin-Manuel Miranda, creator of Hamilton: Both are ambitious straight guys revitalizing the grand tradition of musicals.

Surprisingly, many movie musicals are made these days, but most of them are animated kids” movies, such as Moana, Trolls, and the upcoming Sing. (And Rachel Bloom’s Crazy Ex-Girlfriend has set a new standard for spoof musicals on television.)

But Hollywood has been waiting a long time for somebody with whatever it takes to bring back glamorous live-action movie musicals. They hope Chazelle is The One.

Thus Whiplash, despite only a $3 million budget, not only won Simmons his overdue Best Supporting Actor award, but also editing and sound-mixing Oscars.

And at the moment, the $30 million La La Land is the favorite for Best Picture, unless Silence, Martin Scorsese’s as-of-yet little-seen labor of love about Catholic missionaries in Shogun-era Japan, comes through.

People who don”t like traditional musicals complain about characters bursting into song: “That’s not realistic!” So La La Land tries to lure in the musical doubters by having Gosling and Stone sidle into their songs, starting quiet and slow. But eventually, scores of extras are dancing on the roofs of their cars stuck in a freeway overpass traffic jam, or the leads, after watching Rebel Without a Cause, are sneaking into the Griffith Park Observatory to play among the stars.

Chazelle is even more of a musical traditionalist than Miranda, eschewing rap and even rock in favor of midcentury jazz and standards. Composer Justin Hurwitz put tremendous effort into coming up with a half-dozen new songs that would be worthy of a Vincente Minnelli musical in 1950.

As singers, Gosling sounds like the sideman he plays in the movie, and Stone is a little breathy. As dancers they”re not quite Gene Kelly and Cyd Charisse. Still, they”re up to the challenge of long MGM-style takes rather than quick MTV-style quick cuts.