Evil Men and Their Champions 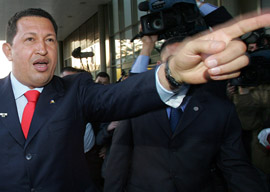 The gift of political prophecy is certainly not mine, and I suspect that the best, most certain way of prophesying correctly is to prophesy often. That way one will, by laws of chance, sometimes be right. The human mind’s propensity to remember its successes and forget its failures will see to the rest: One will soon come to think of oneself as an oracle.

Nevertheless, some people have such a gift for getting things wrong that it implies perspicuity of a kind”a mirror-image kind, no doubt, but still not altogether to be despised, for they are useful as guides. In the days when I read The Economist religiously (more than thirty years ago), I marveled at its ability to get so much wrong, and in such dull prose into the bargain. It was almost like the fifth horseman of the apocalypse: No sooner did a country flourish on its pages than it descended into civil war or total economic collapse. Such, at any rate, is my recollection, though memory is sometimes no more reliable than prophecy.

There is a certain kind of Western third-worldist, usually upper-middle-class, educated, intelligent, cultivated, gifted, and completely stupid, who sees in some godforsaken country or unscrupulous leader the hope of the world. The late Basil Davidson, for example, a brilliant linguist, excellent writer, charming man, and brave adventurer, had an astonishing gift for extolling leaders and political movements just before they were about to bring about catastrophe, mass murder, and total impoverishment.

“There is a certain kind of Western third-worldist who sees in some godforsaken country or unscrupulous leader the hope of the world.”

Thus he extolled Tito shortly before that great man embarked on killing hundreds of thousands of his countrymen. He then saw an immensely bright future for China just before the Great Leap Forward and its consequent famine, which was probably the worst, in numbers of victims, in the whole of human history. Perhaps his greatest feat of clairvoyance was in seeing a brilliant future for Guinea-Bissau as beacon and teacher of justice and equality to the world. Neither age nor experience could wither his enthusiasm: He was always a man in search of his next illusion. In a way it was admirable, though if I were a poor peasant somewhere in the world that Basil Davidson was visiting in preparation of a book extolling a guerrilla movement, I would tremble for my own future.

The former literary editor of The Guardian, Richard Gott (who resigned his post because he had taken Soviet money, though this did his career little lasting harm), is another of the species; but while there is hardly a third-world totalitarian of whom he did not approve, he was mainly interested in Latin America. His last great hope was Hugo Chavez of Venezuela, who, of course, was much less sanguinary than his previous favorites such as Che Guevara. Whether it was Gott or the leftist caudillos who grew more moderate is an open question; be that as it may, Gott saw in the pantomime-Castro, the opera buffa revolutionary, Hugo Chavez, yet another potential savior of the continent.

In 2000 he wrote a book about Chavez that I thought startling in its adulatory idiocy. The Bourbons may have learnt nothing and forgotten nothing, but Gott was far worse than any Bourbon. Despite it being obvious that Chavez’s crude and demagogic economic notions were capable of producing a sand shortage in the Sahara, Gott saw in them a rainbow with a pot of social justice at the end of it. As late as 2012, Gott wrote an article in The Guardian with the title “Chavez’s economic lesson for Europe.” Its subtitle was “Hugo Chavez’s rejection of the neoliberal policies dragging Europe down sets a hopeful example.”

Chavez’s policy was simply to use Venezuela’s large oil revenues, in effect its unearned income, to subsidize the standard of living of millions of people, while at the same time antagonizing foreign and even domestic capital. Oddly enough, it did not occur to the learned author of the article that Greece, for example, had no revenues from a resource comparable to oil to distribute, though for a time borrowed money played the role of those oil revenues; nor that an economy utterly dependent on the price of oil was extremely fragile, and that to distribute largesse on the assumption that the price would remain high forever was improvident, to say the least.