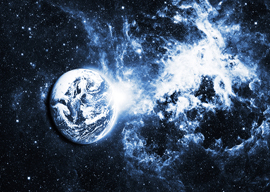 The upcoming presidential debates will likely sidestep details of immigration, employment, offshoring, or public safety. Instead, valuable minutes will be given to philosophical issues, providing ample opportunity for each candidate to embarrass himself.

Because tonight’s initial skirmish will cover domestic issues, two topics may arise: abortion and evolution. One deals with when a life begins and the other with when all life began.

Evolutionists start their tale with the dawn of time. They speak of infinitesimal amoebae, flopping amphibians, and being able to differentiate epochs by a few bone fragments. But this multi-millennial march of development ceases abruptly at Homo sapiens.

Creationists seemingly begin their story in the same place, but after those first seven days they jump ahead to the here and now, where everyone is equal and we are all the same in the architect’s eyes. Thus in a strange way the creation crowd focuses mostly on the moment rather than on antiquity.

What both sides have in common is an underlying awareness that their sequence of events will lose acolytes if told in its entirety. Evolution advocates human development away from apes, a doctrine that by its very definition deems those who exhibit apelike traits as genetically inferior. Meanwhile, creationism insists that God himself intended any such deficiencies. Both are uncomfortable premises.

“Creationists may be engaging in fairy tales, but it’s difficult to believe their world isn’t a better place to live.”

One takes a logical approach through the eons until the point that modern sensibilities are offended by where that logic leads; then it hysterically clings to unsupportable and largely imagined notions of inherent equivalence.

The opposing philosophy begins with an assurance only borne of the belief that we are now as we have always been. Its subject is a constant, with surroundings the only variable. Any proofs of ancient or nuanced development are met with voluble denunciations.

“Scientists,” whose methodology is often anything but scientific, frequently behave like corrupt police deciding who committed the crime and fitting evidence to that theory. Most notable are large gaps in mutative fossils of almost every species, which over millions of years ought to abound. Those provided as evolutionary are often merely extinct side branches, closer in relation to the original animal. Unfortunately any queries result in denunciation rather than exploration. Yet it is not “anti-science” to question science.

Creationists are not above similar behavior, claiming that although the Bible states origination took seven days, it doesn’t specify what constituted a day. But being written by the Almighty himself, the Bible’s vocabulary was presumably chosen with care.

Evolutionists also engage in linguistic sleight of hand. They’ve replaced the “missing link” with a rich mosaic of “transitional species” and argue that their theory is somehow made stronger by a multitude of absent branches filling out our broad evolutionary tree.

Most dubious among creationist claims is intelligent design. As an example”I’m not making this up”they posit that because a hand is well-fitted to a banana the two were literally made for each other. Not only is this specious but, bananas aside, the whole idea fits more properly into the evolutionist worldview.