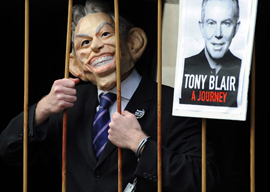 Politicians, especially those who climbed to the top, should disappear when they leave office. Deprived of spokesmen and advisors, they are bound to reveal character flaws they concealed while selling themselves to the electorate and their financial backers. Abraham Lincoln and Franklin Roosevelt were probably fortunate to die in office rather than spend their dotage regaling the public with their triumphs or, worse, their second thoughts.

A few years after the Conservative Party jettisoned Margaret Thatcher for John Major, a friend of mine gave her a party at his North London house. My face that evening bore the bruises and scars of a thorough mugging in the street near my Notting Hill home. Lady Thatcher kindly asked what had happened, and our host explained that three men had jumped and beaten me a few nights before. He added that the culprits were black. Suddenly animated, she told me that she and her husband Dennis just had a terrible experience. With the passage of years, I am forced to paraphrase her: “Dennis and I just came out of a reception at the CafÃ© Royale. And do you know what? As we went to our car, there were people outside demonstrating against me. And do you know, most of them were black?” I was not certain this constituted a bond between us. I paraphrase her next words: “Do you know what I think? I think people like that should lose their benefits. Yes! In fact, I want to raise this with Peter Lilley.” Lilley, serving at the time as Secretary of State for Social Security, slid away to another corner of the room before she could offer him advice that would undoubtedly end his career. (I am happy to say Lilley is still a Member of Parliament.)

“Abraham Lincoln and Franklin Roosevelt were probably fortunate to die in office rather than spend their dotage regaling the public with their triumphs or, worse, their second thoughts.”

Those who love Lady Thatcher will not abandon her over my story, and those who loathe her will not be surprised. It serves only to reinforce my contention that former leaders should confine themselves to retirement pursuits such as fishing, as Alec Douglas-Home did. If they must speak at all, they should limit themselves to statements about the weather.

Tony Blair retained his unbounded hubris and hypocrisy after leaving Downing Street. In an astounding interview with London’s Prospect magazine, he confesses that he has learned much about the Middle East since leaving office. This is a man who sent his country’s bravest and best to die in the Middle East. He told Prospect, “One of the most shocking things is how much more I know about this now than I did when I was dealing with it.” It is difficult to decide which is more shocking: that he knew so little when he was making policy or that he admits his ignorance.