Explicating the Bible of Texas 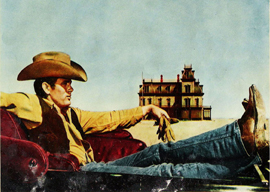 I speak, of course, of Giant, the 1956 multigenerational epic starring Rock Hudson and Elizabeth Taylor that was based on a book written by an old-maid liberal feminist Jew from New York and brought to the screen by a self-righteous martinet from California who started his career working on Laurel and Hardy short films and then became “the conscience of Hollywood” after photographing the piles of dead bodies at Dachau. It’s something of a miracle that over the past six decades native Texans have embraced this saga as authentic history, given its provenance, especially since there are actually two official state movies, and the other one is based on history, not fiction.

The other Texas origin story is The Alamo, the 1960 extravaganza starring John Wayne as Davy Crockett. It’s one of several movies about events surrounding the Battle of the Alamo, and none of them are very satisfying because (a) nobody likes stories where everybody dies; (b) the brave martyrdom of Bowie, Travis, Dickinson, Bonham, and Esparza no longer has any meaning for a state of 28 million people who, ironically, do not remember the Alamo, including many who don’t even realize that the state was once an independent nation; and (c) the story is better told in straight nonfiction accounts like Lon Tinkle’s 13 Days to Glory.

The more mundane reason for the Alamo story fading into history is that it has a one-act structure, or perhaps an act and a half. After Travis draws a line in the sand, offering the doomed fighters one last chance to escape, the only other drama is the part where Davy Crockett kills 16 more Mexicans after his rifle stops working.

“Nobody watches the 1960 depiction of John Wayne killing Mexicans anymore. Everybody knows Giant.”

Giant, on the other hand, is all about returning the Mexican people to their rightful place in Texas society (“society” being a relative term since, after all, it’s Texas). As the world of ranching is replaced by the crass empires of the oil millionaires, cattle baron Rock Hudson—best role of his life—makes the mistake of marrying Virginia debutante Elizabeth Taylor—one of the best of hers—and when he brings her home to West Texas, she’s appalled, and not just because the empty land outside Marfa looks like the end of the earth. (It does.) She thinks the vaqueros and their families should be allowed to attend the same churches and aspire to the same jobs as the Anglo-Saxons. As we all know from the Edna Ferber novel, those are heresies to Rock’s way of thinking, and his attempts to make the Benedict Ranch heritage last two more generations are foiled by the shift of the state to an oil-based economy (embodied by James Dean as Jett Rink, the crass rebellious white-trash instant millionaire next door) and, even worse, miscegenation (Rock’s son, Dennis Hopper, marries a Mexican and gives Rock a half-breed grandson).

It’s a great movie and has many themes, but the whole arc of the story can be understood as “The Reeducation of Bick Benedict” (the Rock Hudson character). Rock doesn’t choose to stop being a bigot; he gets the bigotry beaten out of him by his wife and son and a Texas that simply can’t keep pushing back against the legacy of the Spanish missions. In 1956, three years after Brown v. Board of Education, that was a message that, in the South, you would think might rustle up some hackles. The fact that it didn’t—and the fact that, to this day, Texas politicians are a moderating influence on the hard-liners who want to close the Mexican border—indicates more than anything that sometimes films can change minds. Nobody watches the 1960 depiction of John Wayne killing Mexicans anymore. Everybody knows Giant.

And now Don Graham, English professor at the University of Texas with a lifelong interest in cinema, has given us a handy well-written guidebook to the making of the film, called Giant: Elizabeth Taylor, Rock Hudson, James Dean, Edna Ferber and the Making of a Legendary American Film. Notice the name that’s missing from the subtitle: George Stevens, one of the “big four” directors in the ’50s (the others were Wyler, Kazan, and Hitchcock), responsible for such award winners as A Place in the Sun, Shane, and The Diary of Anne Frank. It was Stevens who persuaded Jack Warner, head of Warner Bros., to option the novel and put the project into development. It was Stevens who fought to film on location in Texas instead of using one of the many fake-Texas backlots in California. It was Stevens who worked more than a year with two writers to create a 366-page treatment from the novel and then a 285-page first-draft script. It was perfectionist Stevens who hired an artist to create portraits of the characters in the novel, without regard to existing movie stars, in order to cast the parts as closely as possible to Bick and Leslie Benedict, Jett Rink, and the rest. It was Stevens who fought with the Warner Bros. lawyers, who were terrified that the studio would be sued by the King Ranch—Ferber had based the family on the Kleberg ranching family—or by Glenn McCarthy, the eccentric oilman who inspired the character of Jett Rink.

Most important of all, George Stevens was the general who ran a three-year military-style operation to create one of the last masterpieces of the Old Hollywood System. That’s the system that wasn’t quite no-expense-spared (Jack Warner was constantly on Stevens about his delays and budget overruns), and it wasn’t quite a contract-player superstar system (casting the untested Rock Hudson, for example, would not have happened ten years earlier), but it was the system in which every single detail of every single shot is painstakingly written down, visualized, photographed, and re-photographed, using those bulky 35-millimeter cameras of a past era, to create a rich canvas on which actors—some of them with only a vague idea of the big picture—could create a larger-than-life world of universal emotion. Movies that people still watch sixty years later are not dashed off in a month at Spahn Ranch.

If I have a quarrel with the book, it’s that Don doesn’t really get inside George Stevens’ head. Perhaps no one ever did. Of all the famous directors of Hollywood’s heyday, Stevens is one of the most revered and least loved. His name is on buildings and endowed chairs and library collections, but there is no George Stevens cult. One gets the impression that he was very much a CEO type who never got that close to the employees unless he really needed a shot, and since he was a workaholic who lived film 24/7, his life is “up on the screen,” which, when it comes right down to it, is the goal of all serious directors.