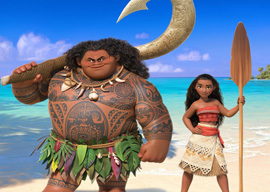 Moana, the new Polynesian-princess animated feature from Disney, is like a less on-the-nose version of Interstellar, the 2014 Christopher Nolan science-fiction epic set on a dying Earth that has cravenly given up on space exploration.

Nolan’s characters complain overtly that humanity has lost its urge to settle new worlds (an implicit criticism of the smallness of current identity politics). But in Moana, Disney’s veteran directing team of Ron Clements and John Musker more artfully turn to the astonishing history of Polynesian settlement of the vast Pacific as an optimistic metaphor suggesting that humanity’s current stagnation in space won”t endure.

This is the third Clements-Musker movie with a nautical setting, following The Little Mermaid in 1989, which inaugurated Disney’s animation renaissance, and Treasure Planet in 2002, their outer-space version of Robert Louis Stevenson’s pirate tale Treasure Island. While Treasure Planet was the least profitable of their seven films, it may have been the closest to their hearts.

Perhaps the best analogue so far in human history to settling the galaxy has been the Polynesians” audacious colonization of the far-flung islands of the Pacific. They repeatedly escaped the Malthusian trap by expanding their territories. Unusually for humans, sometimes they didn”t even have to steal their acquisitions from anybody else.

When Mediterranean sea captains began to venture into the Atlantic at the beginning of the Renaissance, they found that most of the small number of islands were uninhabited. The Vikings had settled Iceland, and Stone Age Berbers were living on the Canary Islands, but desirable islands such as the Azores and Madeira were still empty.

Yet when 16th-century Europeans reached the much wider Pacific, it was difficult to find an island that wasn”t already densely populated. Even remote Pitcairn Island, where the mutineers on the Bounty found refuge, appears to have been previously settled by Polynesian mariners.

Over the past half century, Western researchers, such as U. of Hawaii anthropologist and space scientist Ben Finney, have sponsored a revival of traditional islander talents at wayfinding from one known point to another.

But that still leaves the question of how the Polynesians discovered unknown islands. Presumably they followed birds and studied hints in the clouds and ocean swells?

In Moana, the prehistoric Polynesians have pioneered deep into the Pacific to islands such as Tonga and Samoa, only to have then settled down and turned their backs on the sea. Musker explains, “For thousands of years, they were great voyagers; and then there’s a thousand-year pause where they didn”t voyage.”

Suddenly, the Polynesians regained their dynamism and settled a vast triangle of the Pacific almost 5,000 miles per side, from New Zealand to Easter Island to Hawaii, with Tahiti in the middle as the jewel in the crown.

To fancifully explain both the Polynesian pause and their subsequent second golden age of exploration, Clements and Musker have concocted a children’s story out of scraps of Pacific mythology.

Maui, a trickster demigod the size of an offensive lineman (voiced by the half-Samoan former professional wrestler Dwayne “The Rock” Johnson), has been marooned upon an islet for a thousand years as punishment for stealing a nature goddess” sacred jewel. Moana, a chief’s daughter who loves the open sea, rescues the egocentric Maui and tries to talk him into returning the stone.

The Rock, the highest-earning movie star in the world with $64 million last year, isn”t quite as funny as the late Robin Williams, who memorably played Genie in Clements and Musker’s 1992 Aladdin. Still, he’s eminently competent at a role that mostly has him expounding affably on his own awesomeness, much like the mic work he did as a wrestler in the 1990s.

Clements and Musker have made primarily hand-drawn two-dimensional movies before, but Moana‘s 3-D computer work is spectacular. Films in recent decades have tended to eschew sunshine and bright colors as unserious, but every moment of Moana looks like a National Geographic calendar.

The songs, some of them by Hamilton composer Lin-Manuel Miranda, seem okay, although I can”t guess, based on one watching, whether they”ll grow on audiences. (Yes, The Rock can sing, well enough.)

Moana‘s depiction of ancient Polynesian culture as an egalitarian utopia is reminiscent of the European fad that followed first contact with Tahiti in the 1760s of portraying the South Seas as the embodiment of the concept of the Noble Savage in Rousseau’s Discourse on Inequality. In reality, the caste system in classical Polynesia made 18th-century Versailles seem as casual as a Jimmy Buffett concert tour.