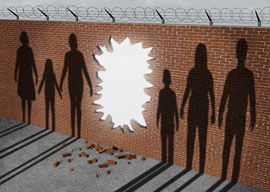 We”ve heard endless denunciations of the Trump administration’s initial minor adjustments to immigration and refugee policy as violating the sacred civil right of foreigners to relocate to America without Americans, you racists, having the slightest say in who and how many immigrants are let in.

Apparently, Extended Stay America is who we are.

For example, consider Trump’s announced intention to look more favorably upon Middle Eastern Christian refugees fleeing ISIS and to look more skeptically upon citizens of seven countries that the Obama administration had put on its list of terrorism-prone places. This has been screechingly vilified as a “religious test” that violates the First Amendment’s ban on Congress making laws respecting an establishment of religion.

Being prudent about terrorism, we are repeatedly informed, constitutes disparate impact discrimination against Muslims. The fact that terrorism is largely a Muslim phenomenon in recent decades means that the U.S. can”t do anything to limit immigration from terror-exporting countries because they tend to be predominantly Islamic.

The conventional wisdom on immigration is rapidly hardening into an ideology of extremist open-borders lunacy, with the Statue of Liberty obsessively invoked to prove that America was founded upon the principle of Muslim mass migration.

Evidently, the arc of the moral universe bends toward submission.

Like most Americans, however, I have had up-close exposure to the workings of immigration. So let me recount for you some old family gossip that reminds me of facts unwelcome in the news at the moment.

Blond Russian girlfriends were an exotic innovation in American life when my lonely widower father-in-law brought one back from a trip to Leningrad in 1991 with the Chicago Symphony Orchestra.

Alina soon made herself at home on his farm in Illinois. It turns out, however, that there actually are laws against random people from around the world moving permanently to America without the government’s permission. And nobody worries that it’s racist to keep out blond white people. So, the Immigration and Naturalization Service kept pestering her about her visa.

Alina wanted my father-in-law to solve her immigration problem for her by marrying her. But, as so often is the case, his four children did not look favorably upon a new claimant to the modest inheritance he and their late mother had laboriously compiled for them.

Perhaps the most memorable tactic Alina came up with around 1995 in her battle with the INS was to pay to have genealogical documentation back home in Russia assembled (or perhaps forged”she was characteristically hazy about the details) that would prove to the government that she was Jewish and thus entitled to asylum under the 1990 Lautenberg Amendment.

This was a striking gambit for several reasons.

First, nobody in America had ever heard a word before about her being Jewish. Maybe she was Jewish the way Christopher Hitchens announced late in life that he was Jewish, much to the surprise of his brother, Peter Hitchens. Or maybe not.

Second, it wasn”t obvious why people of Jewish descent were in need of a special legal privilege affording them refuge in America from Boris Yeltsin’s Russia. After all, the newspapers in the mid-1990s were full of encouraging accounts of Harvard and MIT economists, such as Larry Summers, Andrei Shleifer, Jeffrey Sachs, and Stanley Fischer, tutoring their Muscovite protÃ©gÃ©s on the latest Cambridge consensus on privatization and free markets.

Sure, maybe the new Russia was enduring some growing pains, but Jewish people, at least, seemed to be thriving there. As Yale law professor Amy Chua pointed out in her 2002 book World on Fire, five of the seven richest oligarchs in 1990s Russia were Jewish. (In Putin’s Russia, about one-fifth of the billionaires are Jewish.)

What wasn”t surprising at the time, however, was that the U.S. government could legally favor some religious groups and disfavor others in its policies toward the outside world.

I was distinctly aware of this because my cousin Mike had been a staffer for Henry Jackson (D-WA), the famous “Senator from Boeing,” who led the military”industrial complex wing of the Democratic Party. Among other Jackson staffers were more historically consequential figures such as the early neoconservative operatives Richard Perle and Ben Wattenberg.

Richard Nixon and his chief domestic policy adviser Daniel Patrick Moynihan had conjured neoconservatism into existence in 1969 by pointing out to Moynihan’s friends among Jewish intellectuals that American support for Israel was contingent upon America not losing the Cold War to the Soviet Union.

However, Nixon and his chief foreign policy adviser Henry Kissinger were simultaneously forging dÃ©tente with the Soviets. This contradiction enabled Senator Jackson, who had strong presidential ambitions, to get to the White House’s right by demanding open emigration for Soviet Jews.

The Soviet Union had been ardently anti-anti-Semitic during the 1920s and 1930s. But during the crisis of WWII its ruling coalition of the fringes realized it needed to placate its downtrodden Russian majority with better job opportunities.

Then, after Israeli politician Golda Meir’s triumphant 1947 visit to Moscow, Stalin became paranoid that Soviet Jews might become more Zionist than Stalinist. Fortunately, Stalin died before a massive persecution of Jews could be launched.