Eye of the Tiger People 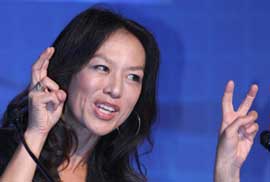 I suppose it would be impolite”vulgar, even”to refer to Amy Chua as a cunt, but it seems like the most apt descriptor for her. She is best known for her 2011 book Battle Hymn of the Tiger Mother, which I didn’t read but I assume somehow argues that throwing your daughters into a steel cage and forcing them to fight over raw meat will make them superior cellists and overall winners at the game of life.

American by birth and Chinese by DNA, the Yale law professor and best-selling author seems to revel in poking under rocks to examine some of the most untouchable topics of the moment”things such as ethnic conflict, “market-dominant minorities,” and, most blasphemously, the idea that some cultures may be innately superior to others. She stops short of suggesting that there may be a genetic component to such cultural superiority”in fact, she bends over backwards denying that it exists”but the fact that she dares to discriminate between groups at all is something that warms my heart, no matter how icy-hearted and cunty she may be. It’s her very bloodlessness that may be part of her charm.

Chua is married to another Yale law professor, Jed Rubenfeld. They have two daughters whom they “raised Jewish” and taught to speak Chinese. In their new book (due to be released February 4) The Triple Package: How Three Unlikely Traits Explain the Rise and Fall of Cultural Groups in America, Chua and Rubenfeld list eight “cultural groups” they designate as innately equipped to excel in the American marketplace. As luck would have it for the happy couple, two of these eight groups are the Chinese and the Jewish people.

“Their thesis is that if you simultaneously feel superior and insecure while abstaining from cigarettes, prostitutes, and heavy sauces, you can make it in America, because it’s all about culture.”

The other six groups are Indians, Iranians, Lebanese-Americans, Cuban exiles, Mormons, and Nigerians.

Yes”the Nigerians. According to Chua and Rubenfeld, Nigerians are one of America’s Eight Master Races. The book’s promotional material states that “Nigerians earn doctorates at stunningly high rates.” Doctorates in what”childhood witchcraft? Baby farming? Penis panics? How to murder someone via telephone? How to transform yourself into a goat? They are highly accomplished in the art of Internet scamming, I’ll give them that. But I suspect that Nigerians may be mere tokens on this list, tossed in at the end to avoid overt accusations of racism.

Groups that didn’t make the cut include Muslims, Mexicans, American blacks, and Appalachian hillbillies. Chua and Rubenfeld argue that blacks have been deprived a sense of group superiority due to dominant narratives of enslavement and government dependence. Regarding the hillbillies, the authors write, “it’s far more socially acceptable today to insult and look down on ‘white trash’ than the poor of any other racial group.’”

Their titular “triple package” involves a trio of “traits” shared by the superior “cultural groups””traits that determine their disproportionate success in the bloody trenches where groups clash over wealth and power.

The first trait is a “Superiority Complex,” meaning that one feels part of a group that is predestined for greatness. This doesn’t quite jibe with the demonstrated fact that self-esteem is often inversely correlated with academic performance and income.

The second trait is “Insecurity,” which would seem to contradict the first trait. It’s unclear how feeling simultaneously superior and inadequate would lead to success rather than insanity, but again, the book hasn’t been released yet, so I can only speculate.

The third prong of the triple package is “Impulse Control,” which will immediately lead all readers to think about black people no matter how pure their intentions are. I remember a nun in high school telling our sociology class that the reason Negroes don’t succeed in America is because they haven’t mastered the art of “delayed gratification.” She actually used the word “Negroes,” too. I miss those days.