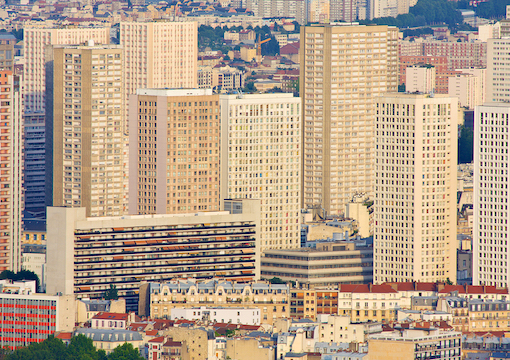 Compared with the slum dwellers of São Paulo who erect their own shacks in a day or two, the average French (or British) architect is a complete aesthetic illiterate and incompetent, or perhaps moron would be a better word for it. Aesthetically, if not hygienically, the favelas of Rio de Janeiro are to the modernist quarters of Paris what Fra Angelico is to Damien Hirst.

During my hour’s permitted exercise in Paris today, I took a walk through one of these modernist quarters. If only it had been impossible to believe one’s eyes! Unfortunately this was not possible. I will say this for the architects, however: Their work is unforgettable and they leave no scope for escape from it but total blindness.

The sheer inhumanity of their designs bespeaks a psychological talent of sorts, that of the torturer under a despotic regime who is able to apply electric cattle prods to humans during the day, disregard what he has done, and then sleep soundly at night, having persuaded himself that his work is socially useful or even laudable.

The area through which I walked was a residential wilderness of concrete in which all the small open spaces have the appearance of prison yards. They were surrounded by menacing iron fences. The best you could say of the buildings—dehumanizing even when on a small scale, with the appearance of a bunker rather than of a house or even of an office—was that you could usually find something even worse within a radius of 200 yards. “No worst, there is none,” wrote the poet Gerard Manley Hopkins of human states of mind, but he might just as well have been writing of the modern architecture of Paris—or, for that matter, of London. On the whole I am against the practice of preventive detention as being the weapon of authoritarianism, but I would be strongly in favor of it in the case of graduates of French (or British) architectural schools, who should be incarcerated immediately on graduation. It is the only way to preserve what is left of the material fabric of civilized urban life.

“The sheer inhumanity of their designs bespeaks a psychological talent of sorts.”

As I walked through the desolation, which demonstrated that modern architects have about as much regard for human individuality as they have for that of cockroaches, I came to the conclusion that, actually, they had some subliminal or unconscious idea of the evil that they had perpetrated. Although they would probably all utter (if put to it) the old modernist architectural mantra “Form follows function”—the function in this case being the cooping up of African immigrants, needed as cheap labor, in the human equivalent of battery chicken farms—the architects display some faint awareness that man does not live by function alone, so that, having erected concrete boxes of various dimensions from tiny to vast, they then, as an afterthought, append some kind of meaningless decoration to the boxes, say a zigzag pattern painted on a side wall, or, worse still, they add some kind of concrete false wall with a hole or a slash in it, the wall sometimes painted mauve or apple green in contrast to the gray behind and surrounding it. The architects have thus invented something new and unprecedented in architecture, features that are neither functional nor decorative, that is to say decorative in any positive way, any way that might lend grandeur, elegance, charm, or tenderness to a building, but is rather a sign of a bad conscience and an inchoate awareness that the inhabitants have been treated as no human beings ought to be treated, namely as an object or an inanimate unit. No doubt the sheer size of the population nowadays, and the bureaucratic complexities of life, ensure that large numbers of people are treated this way some or all of the time; but that is no excuse for incarnating this lamentable fact in architecture.

I was interested in the political slogans that adorned the outer walls of the ground floor of many of the inhuman buildings. It did not surprise me that they should be revolutionary—moderates don’t go in much for painting slogans on walls—but what was striking to me was that they were anarchist rather than communist. Perhaps this was because of some awareness of the affinity of communism—as well as fascism—for this kind of architecture, as a factory for the production of the New Man who has only the supposed collective, or national, interest in his mind, and no personality or character of his own. Between these buildings in Paris and those in Russia under Khrushchev or Brezhnev, or in Romania under Ceausescu, there is nothing to choose. The main difference is in their solidity of construction and consequently the physical ease with which they might be demolished.

Communist iconography used to glorify construction and was full of factories and smoking chimneys as symbols of progress. By contrast, the anarchist slogans that I saw on the walls in modernist Paris were much more fixated on the physical destruction of things, and looking round it was not difficult to see why, and even to sympathize with this emphasis, albeit that Bakuninite anarchism is no more likely to bring about human happiness than is Marxist communism.

The sheer hideousness of what has, on a very large scale, been constructed—at a time, be it remembered, of prosperity unprecedented in human history (I mention this with trepidation at the present historical conjuncture)—is shameful. But far from being ashamed, architects are as the dog in Proverbs:

Or, to put it another way, as an architect returneth to his concrete.

Having expressed an interest over the internet in architecture, I have been bombarded—electronically—by articles by architectural writers extolling the virtues of architectural brutalism in particular. Here is a statement from a recent example of the genre, received only yesterday:

…concrete is linked to the very concept of democracy, applicable to both institutional buildings and housing…. Boston architect Chris Grimley says the material is “expressive, monumental, and [has] got a civic aspiration.”

To which I can only recall the lines by Pablo Neruda (a communist, of course, but a very good poet):