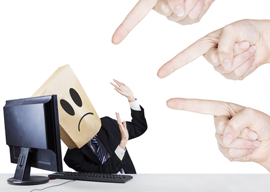 Ezra Levant is a journalist and TV host who is primarily known for fighting the totalitarianism and corruption of various human rights commissions. He’s one of the few with the patience and resources to call them out on their hypocrisy and expose them for what they really are: cultural Marxists determined to dismantle Judeo-Christian culture. He’s also Canadian.

WAIT! Don”t stop reading. I realize Americans get hit with a heaping dose of tryptophan at the first utterance of their neighbors up north, but Levant’s fight affects your everyday life. Along with Britain, Canada is the canary in the coal mine of free speech, and what happens there is a harbinger of what’s to come down here. We”ve already seen Canadian-style PC fascism affect Americans. In 2006, the Ohio Civil Rights Commission made a bar owner remove a sign that said “For Service, Speak English.” Soon after, the Philadelphia Commission on Human Relations told a Philly cheesesteak shop to remove a similar sign.

Since then, the government and the social justice warriors have been working hand in hand to make censorship a viable industry. Last month, an Oregon bakery was shut down after refusing to bake two lesbians a wedding cake. They were fined $150,000 and simply couldn”t afford it. This month we learned of New York’s Cynthia and Robert Gifford, who have been fined $13,000 for refusing to host a lesbian wedding in their own living room. What I find most telling about this fine is that $10,000 of it will go to the state, while the lesbians are left to divvy up the remaining $3,000. Bankrupting citizens is good money for bureaucrats, and once they freeze one person out, the temperature starts dropping for all of us. Ezra Levant is one of the few who successfully fought this frost and he did it by standing his ground to the very end and making every detail public.

“It’s much easier to force an apology than to debate someone or convince him of your position. So, they cheat.”

In 2006, Levant was “investigated” by the Alberta Human Rights Commission for daring to reprint the Mohammed cartoons. He decided to tape the investigation; it became an international story that brought the commission out of the shadows and into the scrutiny of the Canadian taxpayers (who were paying about half a million dollars for the case).

Levant refused to apologize or back down in any way and after paying over $100,000 in lawyer fees, he was exonerated. Since then, he has made it his life’s work to fight for free speech, and it’s all meticulously documented in his thrilling book Shakedown: How Our Government is Undermining Democracy in the Name of Human Rights. There have been some small victories in this war, but since 2006, we”ve seen the idea of thought control spread all over Canada and into America. I spoke to Levant on the phone to get more details on this massive cold front coming down from the north.

Takimag: Why should Americans care about Canada’s Orwellian slide into censorship?

Ezra Levant: Look at the number of people losing their jobs for perceived racism, sexism, and homophobia. It’s already in the culture. It’s only matter a time before it becomes law. There are already a lot of human rights commissions in the States.

Would you say your case is one of the more egregious in the history of Canada’s human rights commissions?

My case was expensive and irritating but many were much worse. There was the woman who called the RCMP (Royal Canadian Mounted Police) on a coworker who was acting strangely after 9-11. He had been to NYC shortly before the attacks and brought back photos of the World Trade Center. She had been friends with him in the past but he was a Muslim who seemed enamored by what had happened and his travel dates were very suspicious. The country was on high alert so she did what she was told to do. He complained to the CHRC and they fined the company.

That’s interesting, because they are making us less safe in the name of protecting people.

That’s what they do. There was the case of the McDonald’s worker who refused to wash her hands. She said it irritated her skin. The company sent her to allergists and did their best to work around it but she kept refusing so they were forced to let her go. She complained to the local HRC and they fined McDonald’s while also insisting they change their hand washing policy.

They can”t. It’s against local health ordinances. The government was telling them to do two different things at the same time. It was a gross misuse of justice in every sense of the word.

In their utopia we”re vulnerable to everything from germs to terrorism.

And it only goes in one direction. There was a complaint in Alberta about a violent anti-Christian song lyric that the HRC refused to take because they claimed Christians cannot be discriminated against. They are not a “protected group.” So, the commissions are not anti-hate. They”re anti-Canada. They”re anti-America. They”re pro-hate in that they hate our society. They won”t protect Christians” rights but they”ll defend Islam no matter what. In that sense, they”re in cahoots with extremist Islam. It makes for a bizarre coalition.

Have they ever prosecuted a Muslim who was anti-Semitic or sexist or homophobic?

Never. Not once. There’s a guy named Al-Hayiti. It means “The Haitian.” He’s a Haitian convert who wrote an incredibly hateful book that translates into Islam or Integration? It condones stoning and death toward Jews and all the other tropes extremist Islam promotes. For the record, I think he should have the right to publish such a hateful book, but that’s exactly what it is.

The CHRC got a complaint about the book but they refused to pursue it. They are petrified of appearing racist and would rather let that kind of hatred slide. What’s amazing about this case is a terrorist later cited Al-Hayiti as an inspiration to commit acts of violence. The HRC’s job is to prevent hate speech that may lead to violence. This did exactly that and they ignored it.

It reminds me of Rotheram, UK where the police let an entire child prostitution ring go unpunished because it was run by Muslims and they didn”t want to appear racist.

Extremists are scary, so the HRC would rather go after someone like me. What am I going to do to them? Tape a conversation? They need someone they can safely dominate and they”re usually successful.

Today, they can force someone to apologize against their will. They did it to a priest who criticized homosexuality. Rev. Stephen Boissoin was ordered to write a letter taking back things he sincerely believed. Then, they demanded that he never repeat such things ever again, even in his own sermons.

They just tried to do that here in the states. A lesbian mayor in Texas demanded to see transcripts of everyone’s sermon because she was concerned about homophobia.

There’s something very Stalinist about forcing people to apologize against their will. This is something Mao used to do during the Cultural Revolution. It’s much easier to force an apology than to debate someone or convince him of your position. So, they cheat.

This idea you can legislate a human emotion like hate. It’s as ridiculous as regulating love.