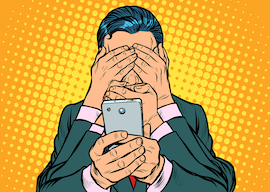 AUSTIN, Tex.—Austin is the only city in America where Congresswoman Alexandria Ocasio-Cortez could speak—as she did last week at the South by Southwest Festival—and listeners say, “She’s a little too conservative for my tastes.” That’s why it’s odd that, in my home state’s capital, this mini–San Francisco, this island of ultraliberalism, Facebook has hired several thousand “moderators” to police speech around the world.

Call me old-fashioned, but I remember when liberal Democrats were First Amendment radicals. Apparently the left-wing credentials of Silicon Valley are overrated: They have fifteen thousand people in the United States and Ireland searching for “hate speech” in order to eliminate it from Facebook.

Hate speech, in case you’ve been in Fiji competing in the 38th season of Survivor, is a phrase used so often that people assume they know what it means.

Anything disparaging based on gender…probably. (Could the late Henny Youngman tell wife jokes in Austin? Probably not.)

Anything disparaging of Jews or Muslims, check.

Disparagement of Christians? That’s another maybe. Certainly the televangelists are carved out as a fair-game zone.

The problem with all this—wherever you stand on hate speech and its offspring—is threefold:

Numero Uno: There are a hundred languages on Facebook. Are you telling me that hipster nerds in Menlo Park are gonna recognize the nuances when, say, a Buddhist in Myanmar writes in Burmese about the Rohingya refugees?

“The way to get rid of so-called ‘hate speech’ is to let it flourish. Since no one really believes this, it will never happen.”

It’s not only legal, it’s been specifically identified by the Supreme Court—using the term “extreme speech,” not hate speech—as protected. In case after case, going back eighty years, the court has said we should take the broadest view of the First Amendment and assume that we should let people speak, write, broadcast, publish, even if their views are so bizarre and hateful that 99.9 percent of the public regards them as insane or dangerous.

The controlling case is 1969’s Brandenburg v. Ohio, in which the court ruled that Ku Klux Klan leader Clarence Brandenburg, a loudmouth asshole of the first order, was well within his rights when he made a public speech in Cincinnati calling for “revengeance” (yes, that’s what he said) against blacks and Jews (only he didn’t say “blacks”). Out of this decision arose the Brandenburg Test, which says that, in order to suppress speech, you need three things:

You have to intentionally be inciting people to commit crimes of violence. Those crimes have to be specific and imminent. (“Let’s go down the street and hang this guy” would be specific and imminent. “I’d like to string that guy up” would not be.) And there has to be a strong likelihood that once the threat is made, the crimes will actually be committed. If any of these three things is lacking, the speech is protected. It can be hateful as all get-out, but it’s still protected.

Now, listen to me, people, because here’s the part that nobody believes.

Numero Three-o: When you let extremists speak, their words eventually become meaningless. It’s only when you suppress them that they gain power.

How do I know this? Because I’ve seen Klan rallies that are so lame they don’t get noticed. Why don’t they get noticed? Because they chose some town that was wise enough not to care whether they gathered there or not. The Klan has no power until it goes into an area that hates it. Clarence Brandenburg knew this. He could have spoken down in the Appalachian part of Ohio, but he chose sophisticated urban Cincinnati instead. He was arrested, tried, and sentenced to prison. It was a great Klan recruiting year.

If Facebook starts flagging more and more people for “hate speech,” those groups will feel abused, righteous, and emboldened. They will publicize the fact that they’ve become outcasts. The Facebook banishment will become a badge of honor, the same way that people proudly post on Twitter that they’ve been blocked by the president.

The way to get rid of so-called “hate speech” is to let it flourish. Since no one really believes this, it will never happen. But in the meantime, somebody should hand Mark Zuckerberg a copy of Brandenburg v. Ohio, and maybe a few nasty, scurrilous political pamphlets from our rich history of profane invective. The proper solution for hate speech on Facebook is no solution at all. It’s a platform for everyone. Putting a bunch of second-rate Deputy Dawg monitors on every street corner of that platform is a recipe for punishing the innocent, rewarding the most clever evildoers, and getting lampooned every time one of your artificial-intelligence algorithms identifies something in a church bulletin as hateful.

We really don’t need 15,000 new speech cops. The church, the universities, the various identity-politics movements, and several dictatorships around the world have already got that covered.