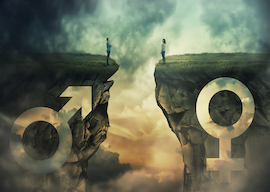 For reasons too convoluted for swift explanation, I looked into the annual Scottish figures for homicide recently. Last year they were down 5 percent and were the second-lowest recorded since 1976. The homicide rate has declined from its peak rate of 2.2 to 1.1 homicides per hundred thousand inhabitants (in the USA in 2016, the rate was 5.3), and the absolute numbers of the recent decrease were so small that, unless they are the start of a trend, they may not have been of any great significance.

So far, this might appear like good news in a world in need of cheering up. But then I noticed something truly dreadful about these figures: their horribly sexist nature.

Of the 59 victims of homicide in Scotland, 45 were male and only fourteen were women. Does this not show how deeply sexist Scottish murderers are? Imitation may be the highest form of flattery, but murder is surely the highest form of compliment to the importance of the person murdered. After all, you wouldn’t kill someone unless he were very important to you. Are not women important enough to Scottish men to be worthy to be killed?

The disproportion in those accused by the police of killing is even more startling. Only four women were accused, compared with 77 men. (More people were accused than killed because—one presumes—some killings were carried out by more than one killer.) Could any figures better illustrate the strong and persistent prejudice of the Scottish police and criminal justice system against men?

What can be done to redress the sex balance of victim and accused alike? There are obviously different possible approaches.

One could, for example, try to reduce the number of men killed. However, this approach is unlikely to work because the numbers are already quite small and resources are limited. One could nevertheless try an advertising campaign to encourage murderers to balance the statistics, for example with slogans such as the following:

MURDERERS!
SO ANGRY WITH SOMEONE THAT YOU COULD KILL HIM?
KILL HIS MOTHER OR SISTER INSTEAD.

“Are not women important enough to Scottish men to be worthy to be killed?”

No doubt it will be objected that this would lead to an increase in the total number of homicides, and so it would. But the important thing to fix one’s mind on is the sex equality produced thereby, surely worth a relative hand’s worth of extra deaths. Equality, after all, is a good in itself. And it might have some collateral benefits; for example, the elimination of those women in restaurants who have extremely penetrating, though not necessarily very loud, voices.

What can be done about the gross disparity in the numbers of men and women accused of homicide, to redress the balance? Surely this should be easy enough? Simply accuse more women. If it were objected that most of these accusations would be false, and that those wrongly accused would suffer as a result, I would argue that such suffering would surely be compensated for by the reduction in the public prejudice—very strong and difficult to alter—that men were more inclined to violence than women. What is important here is not the reality, but the perception of reality; for, of course, perceptions are often self-fulfilling. For example, if girls are thought to play with dolls rather than with guns and toy tractors, they will do so; similarly, if men are thought to be more violent than women, they will be so.

Thus, the public impression that men kill more often than women is the cause of the fact that they do.

Here the media can do their part in bringing about sex equality by (for example) suppressing reports of murders by men and maximizing the publicity given to murders by women. It will take time to overturn ancient prejudices, but history shows that it can be done.

With a little rewriting, plays such as Macbeth that reinforce sex stereotypes of violence could help to destroy them. It would involve reversing the roles of Macbeth and Lady Macbeth, so that Lady Macbeth returns from the wars to her househusband Macbeth, who encourages her to seek power. The three witches would become three wizards, and on meeting them Lady Macbeth would exclaim, “How now, you secret, white, and midday lads!” instead of “How now, you secret, black, and midnight hags!” Lady Macbeth would tell Macbeth (who by now would have had a uterus transplant) to bring forth girl children only, instead of Macbeth telling Lady Macbeth to bring forth men children only. It would be easy to work out the rest of the details of the necessary changes. Children in school, particularly in Scotland, could be obliged to learn the new version.

Another sign of how deeply entrenched in Scotland are sex stereotypes is the way in which the homicide statistics are presented. Whoever compiled them assumed that the sex of both victims and perpetrators was binary, that is to say that they were either male or female. It is true that the majority of the perpetrators identified, or were identified, as men, and that no transgender persons were either victims or perpetrators; but that is no excuse for presenting the statistics in this old-fashioned, prejudicial way.

Even worse were the little icons used to represent men and women in the statistics. The women were schematic figures who wore skirts, while the equally schematic men wore trousers. The best that could be said of these stereotypical figures is that at least they were of equal height, thus helping to overcome the entrenched prejudice that men, on the whole, are taller than women.

With a little effort and imagination, Scotland could become the first country in the Western world where as many women as men commit homicide, and where there are as many female victims as male. Would that not be something to be proud of?