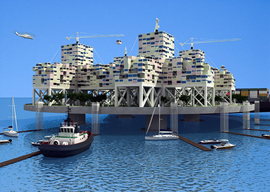 The modern age offers no refuge from the state. The world’s habitable unpopulated regions are firmly under sovereign nations” regulation. There is still adventure to be had in the world, but there’s no frontier, no place to carve out a new way of life free from the state’s meddlings.

Over the last 50 years various dreamers have tried to fill this freedom vacuum. One idea is to build a large ship or ocean platform in international waters and experiment with new systems of government. Called seasteading, it has recently been revived by the Seasteading Institute and its CEO, Patri Friedman. Iconoclastic venture capitalist Peter Thiel has blessed the think tank with his loot and his good name.

“There is still adventure to be had in the world, but there’s no frontier, no place to carve out a new way of life free from the state’s meddlings.”

The engineering isn’t out of reach; the Soviets were building cities in the middle of oceans decades ago. A big question is how such a micro-nation would make enough money to support the structure and inhabitants. Aquaculture is an obvious if unexciting solution. More in the libertarian spirit are subversions of nearby nations” laws. Gambling barges have existed for some time, and ideas as colorful as offshore brothels and plastic-surgery hospitals have been floated. One of the more promising schemes is using an offshore startup incubator to further debauch the H-1B process for obtaining cheap labor. It is not clear why this would work any better than less literal offshoring (and it has been tried), but it seems less likely to incur the wrath of the great powers.

Seasteading has a historical antecedent which still exists: Sealand, whose structure is based on British sea fort that had been built for air defense in World War II. An eccentric British adventurer named Paddy Roy Bates took over the fort, declared it a sovereign kingdom in 1967, and based its economy on illegal radio advertising. The British legal system has taken a largely beneficent view of Sealand; the British do love their eccentrics. Despite its diminutive size, Sealand has had a colorful history. There have been attacks, coups, governments in exile, and fires. It is regularly brought up as a potential data haven for websites in legal difficulty such as WikiLeaks or Pirate Bay.