Farewell to the Poisoned Dwarf and Four Pizzas 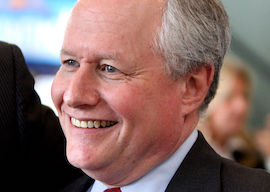 The demise of The Weekly Standard was a pleasure, not because I like to see print magazines go down the drain—to the contrary—but because of its parentage, William Kristol and John Podhoretz. These two unpleasant neocons are known as the “Poisoned Dwarf” and “Four Pizzas,” respectively, and rarely have I seen two bigger con men get away with more stuff than this pair. They are smarmy, loquacious, and incompetent except for self-promotion, and were the movers and cheerleaders for the worst foreign-policy decision Uncle Sam has made, with the possible exception of Vietnam. They, of course, have never apologized but insist to this day that going to war to ensure the safety of Likud is good for America.

I will get to the invasion of Iraq in a moment, but first I need to tell you the following: With founders like the Poisoned Dwarf and Four Pizzas, I compared The Weekly Standard to the two men whose father and mother were Julius and Ethel Rosenberg, the atomic-bomb traitors who fried back in 1953 for betraying their country to Joe Stalin. The Standard did not survive its parents, but the Rosenberg children did, having changed their names to Meeropol. Just before Christmas, a Meeropol daughter, Ivy (granddaughter of Julius and Ethel), interviewed me for an HBO documentary she’s doing on Roy Cohn, the notorious lawyer who worked for Sen. Joe McCarthy and died of AIDS. Roy, incidentally, was a good guy, an in-the-closet homosexual who nevertheless went after the commies in the Army and in Hollywood. His reputation is now mud because he was right-wing, and because he was closeted. Prancing gays no longer accept those in the closet, especially if they were conservatives. In my small way I tried to set the record straight. I am looking forward to seeing how much of what I had to say sees the light of day, and if any of it does, how the homosexuals and the sisterhood will react.

“Rarely have I seen two bigger con men get away with more stuff than this pair.”

And now let’s examine a most serious subject—why a once-omnipotent Uncle Sam no longer wins at war. I recently had a letter and a book from John D. Caldwell, writing to me from Santa Barbara, Calif. I am reading it as I write this, it is as interesting a book as it gets. The title is Anatomy of Victory, and its subtitle, Why the United States Triumphed in World War II, Fought to a Stalemate in Korea, Lost in Vietnam, and Failed in Iraq. The central problem the author addresses is the unsatisfying outcome to the conflicts after 1945. This is something few of us who witnessed the World War think about. Why has the good Uncle become such a patsy? Did we win the war because of the inadequacies of the German strategic architecture, as Robert Citino’s excellent Death of the Wehrmacht points out, or were we as good as the movies of the time tell us?

Caldwell offers a set of guidelines about how to think about involvement in any continuing or future conflict. They make a lot of sense. First and foremost is to align an overseas mission goal with America’s core interests and how to achieve that goal. If alignment fails, however, the mission risks failure beyond America’s control. America certainly knew what the mission was in 1941. (While simultaneously reading James Holland’s The Rise of Germany, 1939–1941, I realized just what a disaster Hitler was for Germany, pushing for war in 1939 without iron ore, oil, tungsten, copper, bauxite, or rubber—and not enough tanks, vehicles, or trained soldiers—yet prevailing because the French were such paper tigers. And still are.) Truman, Johnson, and Bush 43 did not define end states in those conflicts. Police action in Korea failed to win an early victory, and a war of attrition followed that ended in stalemate. An independent and democratic Vietnam was always a pipe dream, at least in my opinion after my second tour of that unhappy place. Americans simply did not understand how the Vietnamese think and live, judging them as corrupt because a South Vietnamese colonel would hire his nephew as an assistant. One man’s corruption is another’s loyalty to his family. President Nixon could have ended the war with honor, as he planned, but a Democratic Congress would not let him. The media was against it, and as we all now know, the media rules absolutely. Watergate made sure South Vietnam would become a vassal state.

Iraq, of course, was the biggest folly ever. Here’s where the Poisoned Dwarf and Four Pizzas revealed themselves to be not only careerists but also more concerned with the safety of Israel than that of their fellow Americans. Let American blood flow, as long as American settlers in the West Bank can live free on stolen Palestinian lands.

The irony is, of course, that Kristol and Podhoretz are still welcome in Washington and—like that other scumbag who took perhaps as many as nine deferments from the draft, Dick Cheney—have the gall to offer their opinions to the unsuspecting. Once upon a time, people who had done something that had brought them shame or had harmed the national interest retired from public life and were never heard from again. But those people were gentlemen—something no one could ever describe the Poisoned Dwarf and Four Pizzas as.