Farewell, A Vaguely Accurate Portrayal of the Cold War 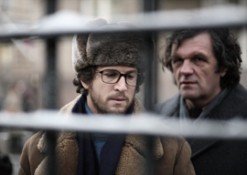 We won the Cold War two decades ago. Do we yet know why?

As T.S. Eliot noted in Gerontion

, “History has many cunning passages, contrived corridors…” In 1945, Winston Churchill banned all mention of the immense Ultra project that had broken the Nazi Enigma code. Ultra’s 1974 declassification rewrote the history of WWII. Hence, there’s time for new insights into the conflict with Communism to emerge.

The Cold War offers a trove of gripping and unfamiliar stories. Slowly, European filmmakers have begun turning their attention to the biggest story that happened on their continent from 1946-1991. For example, Florian Henckel von Donnersmarck’s film about Stasi surveillance in East Germany, The Lives of Others, was, to my mind, the best movie of 2006.

Farewell, an engrossing French spy movie in which Ronald Reagan is one of the heroes, is perhaps the finest film of this year. Veteran character actor Fred Ward (astronaut Gus Grissom in The Right Stuff) plays Reagan in a supporting role, while Willem Dafoe (the Green Goblin in the first Spider-Man film) portrays his CIA director William Casey.

Farewell makes the audacious claim that our Cold War victory was substantially hastened by a lone KGB colonel codenamed “Farewell.” In 1981, Vladimir Vetrov, a fed-up Russian engineer, began copying KGB technology documents and delivering them to the French equivalent of the FBI. Socialist FranÃ§ois Mitterrand, who had been elected president that year with the help of the Moscow-controlled French Communist Party, demonstrated his anti-Communist bona fides by personally passing along the “Farewell Dossier” to Reagan on July 19, 1981.

The Francophile KGB man didn”t ask his French contact for money, just for a few Parisian luxuries to remind himself of the halcyon years he”d spent spying in France. And some Queen albums for his beloved teenaged son, an engineering prodigy for whom Vetrov wanted a country of “careers open to talent” rather than Brezhnev’s regime of hereditary privilege and incompetence.

“In 1982, Vetrov handed over the names of hundreds of Soviet industrial espionage agents operating in the West. In the film, the Americans gain confidence from Farewell that they can win the Cold War through technology competition.

Vetrov did not betray hard-earned Soviet technological advances. By the 1980s, there weren”t many. Instead, he revealed that”to an extent that surprised even Reagan”the Soviets were remaining competitive in the Cold War only by purloining Western breakthroughs.

This had been subject to debate within American intelligence circles for years. The mainstream CIA view was that the Soviet planned economy was a formidable rival, a model of rational centralization. Heretics such as Stefan Possony and Jerry Pournelle countered that from what they could see in satellite photos, the Soviet Union was actually “Bulgaria with missiles.”

Farewell was mostly filmed in the grand heart of Czarist Moscow, so what the movie shows us of Russia looks pretty good. Moscow’s endless suburbs of shoddy worker’s housing projects are omitted, making the cinematography easier on the eyes, but obscuring what seems to have been a key point of Vetrov’s motivation.

In reality, as P.J. O”Rourke reported after taking a 1982 Nation magazine cruise down the Volga with nostalgic old American lefties, “The place just wears you out after a while. There is not a square angle or a plumb line in all the country. Every bit of concrete is crumbling from too much aggregate in the mix, and everything is made of concrete.” Vetrov is depicted as a Russian patriot motivated less by ideology than by a proud nerd’s disgust that the Party, which had put the first man in space when he was young, could now only come up with new ideas through theft.

In 1982, Vetrov handed over the names of hundreds of Soviet industrial espionage agents operating in the West. They were rolled up, leaving the Soviets flying blind.

In the film, the Americans gain confidence from Farewell that they can win the Cold War through technology competition. We see a young Mikhail Gorbachev watching Reagan’s 1983 Star Wars speech. In reaction, Gorbachev conspires with an alarmed Air Force general to shake up the Soviet system.

Perhaps to simplify an already complex plot, Farewell omits the amusing sabotage campaign organized by Gus Weiss of the National Security Administration. He explained in 1996: “Contrived computer chips found their way into Soviet military equipment, flawed turbines were installed on a gas pipeline… The Soviet Space Shuttle was a rejected NASA design.” There’s a rumor that American disinformation caused an immense explosion in a Soviet natural gas pipeline in 1982.

How much of this is true? It’s well documented. But are the documents disinterested? (Mitterrand came to believe it was a CIA plot to test his loyalty.) As of 2010, all I can be sure of is CIA counterintelligence czar James Jesus Angleton’s observation that spycraft is, in Eliot’s metaphor, a “wilderness of mirrors.”