Fat People Are Killing Us 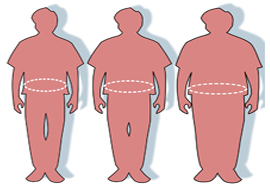 Last Friday was World Obesity Day, and I celebrated by continuing to stay in shape.

Every three years, excess body fat kills twice as many people than the Holocaust supposedly did in six years, so why aren’t donuts illegal?

That’s more than ten times as many people who were murdered worldwide in 2015.

So where the heck is the outrage? Is it due to the fact that although very few people commit intentional homicide or drive their Dodge Challengers through crowds of leftist rioters, a staggering 73 PERCENT of Americans are overweight or obese? Does it mean that if we start giving fat people the verbal abuse they need in order to cease their wrongdoing, we’ll have to start insulting three out of every four Americans?

Two out of every five adult Americans are not only overweight, they’re obese. That’s a massive army of nearly 100 million human hogs who are lowering life expectancy and driving healthcare costs through the roof. That’s one hundred million sweaty, waddling tubs of suet who are not only a threat to public safety and the healthcare system, they are an aesthetic atrocity on the level of fanny packs or Richard Simmons’s Disco Sweat exercise tape. No one wants to look at these people, and yet due to some ultimately murderous sense of “decency” and “compassion,” we have no choice but to stare at the results of their horrible life choices.

The National Institutes of Health estimate that extreme obesity—defined as being more than 100 pounds overweight, a condition that affects one in every 16 Americans—can shorten life expectancy by 14 years. A recent study from Columbia University found that obesity accounts for nearly 1 out of every 5 deaths in the United States. That’s over 500,000 deaths every year simply because Fatty McFatterson couldn’t put Doritos down.

We are told that five million American children are already obese, meaning they will likely be obese their entire lives and destroy everyone else’s quality of life by contributing to global warming with their rancid flatulence and by taking up way too much seat space in movie theaters and on airplanes.

If you’re one of those “live and let live” types who think that fat people only hurt themselves, think again. According to a recent article in Science Daily based on a 2018 study by the Milken Institute:

The impact of obesity and overweight on the U.S. economy has eclipsed $1.7 trillion, an amount equivalent to 9.3 percent of the nation’s gross domestic product….The estimate includes $480.7 billion in direct health-care costs and $1.24 trillion in lost productivity….

The obese among us will immediately think, “How many Twinkies does $1.7 trillion buy?”

But the lean, mean, and sane among us will think, “Decent Americans who know when to push away from the dinner table do not deserve to be extorted to the tune of $15,000 to pay for every fatty-fat ass who can’t control their gluttonous impulses.”

Universal healthcare means that universally, thin people are financially penalized for fat people’s rotten culinary habits. We pay for their high blood pressure, their type 2 diabetes, their heart attacks, their strokes, their gallbladder disease, their osteoarthritis, their sleep apnea, the various obesity-related cancers they contract, and for all the mental-health treatment that goes hand-in-hand with realizing you are encased in a prison of blubber.

The problem is a global one. According to the New England Journal of Medicine, over 10 percent of the entire world’s population is now obese. Not just overweight—OBESE.

I can think nothing more terrifying than the sight of 700,000+ million tubs of lard wandering brainlessly toward me demanding more potato chips.

Remember when starvation was the big global health crisis? Those days are gone. According to Mike Bloomberg of the World Health Organization:

Today, for the first time in history, more people are dying from too much unhealthy food than they are from too little healthy food. This is a global epidemic that governments can no longer ignore, because there are many steps that they can take to tackle obesity and save lives.

The world, my friends, is a revoltingly overweight place, and until belly fat and lumpy buttocks are greeted with the same universal social revulsion as the swastika, we will all grow so absurdly plump that even our caregivers will be too fat to wipe us.

And yet we live in a climate that tells us there’s something wrong with telling fat people there’s something wrong with being fat. Since leftism is little more than an attempt to invert the moral paradigm—to sanctify everything once considered profane and to demonize everything once considered sacred—it has stretched out its Big Tent way beyond capacity to embrace fat people, too. The “Fat Pride” movement apparently extends way back to 1967, when 500 or so people met in Central Park to stage a “Fat-In” where people burned diet books.

If only they were so zealous about burning calories.

But no, we are encouraged to wrap our arms around fat people as far as our arms will extend. We are scolded into believing that saying, “Hey, you’re killing yourself and burdening our healthcare system” is a hate crime rather than the ultimate act of tough love.

Fear not, fat people. You have nothing to lose but your guts.