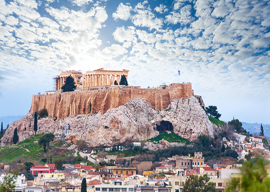 A bunch of charlatans and clowns met in Athens, Greece, at the end of September and, to use an old Greek expression, managed to make a hole in the water. In other words, they accomplished nada, but they stuffed themselves with feta and tasty Greek food, stayed at the best hotels, accepted honorariums, pumped up their egos and self-esteem, enjoyed the Attic sun, and then went back to their ugly wives and lives in and around Europe. The subject the charlatans discussed was democracy, a system that once upon a time in Athens used to work almost to perfection. That was about 2,500 years ago. It worked because it was a selective democracy, where only educated and responsible citizens had the right to vote.

The Forum was organized by The New York Times and some United Nations fund, but I don”t know who paid for the fat cats who spoke the rubbish they did. It was mostly hacks, as we call journalists in Britain, the most egregious being the bald and whiny columnist of the Times, Roger Cohen. (He’s always complaining about how he came from a Central European shtetl, moved to South Africa, then to England, then to America, and so on, as if anyone really cares to know about a very ugly man’s family and their peregrinations.)

Another cosmopolitan peregrinator, also a Times hack, gave us a long lecture following the forum about how democracy is not irreversible. Gee, really? What makes me feel contempt for these phonies is the fact that they tell such blatant untruths and sugar them with politically correct adjectives. They dump on Trump at every opportunity, praise Angela Merkel to the heavens for allowing one and a quarter million Africans to invade Germany, ignore the fact that Europe will be a Middle Eastern territory in fifty years, and bang on about the evils of authoritarian regimes democratically elected by people who wish to remain Christian nations and white. Oh, yes, I almost forgot: They pretend that the European Union, run by unelected bureaucrats who are mostly in it for the money, is a democratic institution and that Brexit was something of a coup d”Ã©tat instigated by dumb and ignorant white people in Britain.

What I”d like to know is why none of the fat cats who gathered in Athens”the diplomats, the so-called scholars, the politicians, the journalists, as well as the corporate “leaders””mention the evils of Islam. Here is a continent under constant attack by Islamists, with hundreds slaughtered in Paris, Nice, Brussels, Munich, you name it, and priests having their throats cut and with no-go areas in major capitals controlled by Muslims where gays or people carrying liquor are beaten with impunity while the fuzz looks the other way. In the north of England hundreds of white working-class girls were raped and forced into prostitution by Pakistanis, and the police ignored it because it was politically incorrect to investigate.

But I write this for American consumption, and the message is, you”re next. The first reaction of the egregious Hillary after the bombs went off in New York was to remind Americans that not all Muslims are terrorists. No, they”re not, but all terrorists are Muslims. Just think about it. These Chechens, Afghans, Pakistanis, and Saudis come into our country from their hellish homelands where democracy is as alien a concept as Christian charity, and place bombs and kill innocent Americans in the name of the prophet. Yet the immigration authorities keep them coming, keeping white Europeans out and letting brown and black terrorists in. You couldn”t make it up, as they say in rainy old England.

If Churchill’s government during World War II had gathered in order to discuss how to safeguard English people with German-sounding names, and gave the subject priority over the Blitz, eyebrows would have been raised and the government forced to resign forthwith. Today in Europe the EU meets regularly and discusses how to keep borders open, how to punish the Hungarians and Poles and Austrians who do not wish to admit more Muslims. Yet it is the Brits who are scorned by the propagandists and liars who write in The New York Times for having chosen to be their own masters rather than be dictated to by Brussels.

Donald Trump is not the ideal candidate by a long shot, but Hillary is the type of politician who has brought Europe to the state it’s in. She will kiss the rear end of the Saudis, the very people who have financed every single imam, who in turn have radicalized the terrorists. She will remain in bed with the fat cats of Goldman Sachs and the rest of the Wall Street crooks. And for an added bonus she”ll bring Bill Clinton back to the White House, where he can finally enjoy himself out of reach of the media that so adores the 21st century’s Bonnie and Clyde.

America, you have been warned!