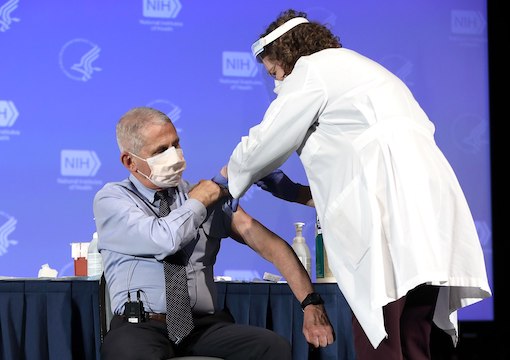 This week, ABC News reporter Jonathan Karl asked Dr. Anthony Fauci, the soon-departing head of the National Institute of Allergy and Infectious Diseases, if it was a “mistake” for schools to be shuttered as long as they were during the COVID pandemic. “We should realize, and have realized,” Fauci answered, “that there will be deleterious collateral consequences when you do something like that,” adding that he had “nothing to do” with schools closing.

This is a transparent legacy-saving revisionism.

Fauci now portrays himself as a humble public health official who had merely shared scientific advice and information with decision-makers. This self-serving depiction conveniently ignores his fearmongering, his coaxing and lying to manipulate behavior and his partisan scheming. Governors regularly leaned on Fauci’s positions as justification for their unconstitutional shutdowns of churches, economic lockdowns and school closures. And Fauci praised them for it. Then-presidential candidate Joe Biden urged governors to “listen to Dr. Fauci” for their guidelines. Most already had. When Biden won the presidency, Fauci blamed the alleged underperformance of the United States under Donald Trump on the “disparate responses of different states versus the unified approach.” The unified approach, of course, was the Fauci approach.

“Fauci merely epitomizes the authoritarian public-health mandarin who is imbued with far too much power and influence.”

If the spiritual leader of the “follow the science” crowd knew, as he now claims, that “draconian” COVID policies would lead to “collateral consequences,” why didn’t he mention this fact back then? And why did he portray those who did as politically motivated and anti-science?

“Fauci testifies consequences of reopening too soon could be ‘really serious,'” ABC News reported in May 2020. After being grilled by Sen. Rand Paul on the dearth of science justifying school closings, Fauci responded with an alarmist rant about unexplained inflammations among kids caused by COVID. “Be careful,” Fauci warned, because children were not “completely immune” from “the deleterious effects” of COVID, refuting a claim neither Paul nor any other serious critic had ever leveled.

At the time, Ron Klain, a top Biden campaign adviser who now serves as Biden’s chief of staff, tweeted, “I can’t believe I live in a country where the nation’s leading infectious disease expert has to explain to a Senator that we ‘really ought to be very careful … when it comes to children.'” Was Klain being “very careful” when smearing those who argued that shutdowns could also hold significant undesirable consequences and did little, if anything, to save lives? For Klain, partisanship trumped public health. For many others, prudence had legitimately morphed into stifling fear. Fauci used this trepidation to feed attacks on those who disagreed with him.

When it mattered, Paul was right. Shutdowns inflicted profound harm on children, not to mention erasing decades of advances. Fauci would often make perfunctory statements during 2020 about the importance of reopening schools as soon as the virus was “under control.” He remained absurdly vague about what that meant. And when any concrete efforts were undertaken to open schools, Fauci opposed them.

In March 2020, Gov. Ron DeSantis announced that Florida schools would reopen in April. When left-wing pundits accused the governor of being the leader of a “death cult,” Fauci stood in front of a White House lectern and told the nation that children who went back to school “will likely get infected.” Not “could” get infected but would “likely” get infected. He later told a Tampa television station that, on the subject of opening schools, it “doesn’t make sense when you’re trying to do everything you can to protect children, to do something that would interfere with the protection of the children.”

Later in 2020, three scientists — Martin Kulldorff of Harvard, Sunetra Gupta of Oxford and Jay Bhattacharya of Stanford — released the “Great Barrington Declaration,” a document rejecting the popular position on the efficacy of lockdowns and warning, among other things, about the damaging “physical and mental health impacts” of closing schools. “Keeping students out of school is a grave injustice,” the document stressed. Fauci was not merely passing on the latest public health information when he helped plot a “quick and devastating published takedown” of the Great Barrington Declaration. No, he used his immense influence to help stifle debate over school closings.

By January of the next year, when it became convenient — and Biden won the presidency — Fauci would finally admit that it was “less likely for a child to get infected in the school setting than if they were just in the community.” The science hadn’t changed. He offered no proof that it had. Now, in the end, it’s elected adherents of Faucism who are most culpable for the “deleterious” effects of school lockdowns. Fauci merely epitomizes the authoritarian public-health mandarin who is imbued with far too much power and influence.

Still, the man who once proclaimed “I represent science” doesn’t get to rewrite history to erase his leading role in that disaster.