Fear of a Gray Planet 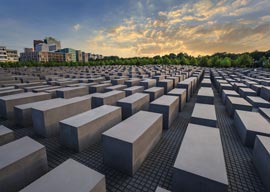 Do you know how giddy I was to write that? I was giddy because I know I”m the first person in the history of the world to string those words together as a sentence. When I was a teenager, my friends and I used to see if we could come up with a legible sentence that no human before us had ever uttered. To this day, I still recall winning that competition by saying, “Look out, here comes Edward James Olmos on a unicycle, and he’s brought the woodpeckers.”

As much as that line still makes me laugh, it was pure fiction. But the Hilberg sentence is real. Yes, Raul Hilberg, the father of Holocaust history, chose a 1988 PBS documentary in which Maya Angelou uses tai chi to overcome rape and evil to make a declaration so startling that PBS edited it out of the broadcast. And, in fact, he may have implicated himself as a perjurer.

How do I even start eating this overstuffed monte cristo of craziness?

“I”m asking my question rhetorically, because I know the answer. It’s the “fear of the gray area.””

“Facing Evil with Maya Angelou” was a PBS special hosted by LBJ dirty-trickmeister-turned-lovable-homespun-Gomer Bill Moyers. The concept of the show was simple: Angelou would explore issues of evil, including lynchings, the Holocaust, and her own rape as a child, and then make everyone feel better with tai chi and “happy dancing.”

Did I say simple? I meant insane.

For some reason (and I don”t know why) Hilberg decided to begin his talk with a startling anecdote. And PBS censored that anecdote (and I totally know why). Some years ago, I found the original audiotape of Hilberg’s speech. The full PBS special is online; you can see it here. Hilberg makes his appearance at the 50:52 mark; his speech begins at 53:36.

This is the opening part of Hilberg’s speech. On the audio clip, I”ve let it run so that it bleeds over into where PBS chose to begin the remarks.

For those of you too lazy to click on the clip, here’s a transcript of the censored portion:

In 1976, I went to a small town in Bavaria, Ludwigsburg, which has the headquarters for investigations of so-called National Socialist crimes, an office maintained by the provinces of the Federal Republic of Germany. About thirty prosecutors were housed in that particular building, and I went there to study court records, various affidavits, and other materials. But one afternoon, they said, “We”re having a party today, would you join us?” Why, yes. They said, “we have one bottle of wine for each person.” (laughter from the audience). And after a while I chanced to talk to the deputy chief of that office, and I said to him this: I”ve been troubled by one question. And I”m afraid that I went into print with something that isn”t entirely accurate. And that is the role of Adolf Hitler himself in the annihilation of the Jewish people in Europe. Now, I know that you are only concerned here with live individuals, and that you do not investigate the dead.

But still … what do you think?

“Ach,” he said, “we”ve often fantasized about drawing up an indictment against Adolf Hitler himself. And to put into that indictment the major charge: the Final Solution of the Jewish question in Europe, the physical annihilation of Jewry. And then it dawned upon us, what would we do? We didn”t have the evidence.”

This is not insignificant. Here’s Hilberg, in 1988, speaking of a conversation he had with German war crimes prosecutors in 1976. In-between “76 and “88, Hilberg testified against Canadian Holocaust denier Ernst Zundel, who was on trial under Canada’s “false news” law. Let’s be clear”Hilberg was helping the Canadian government put Zundel in prison simply for publishing a pamphlet. And on the stand, Hilberg steadfastly maintained that there was at least one, maybe two, direct orders from Hitler to initiate the “Final Solution.”