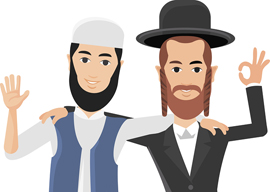 A few days ago, I met a mordant Palestinian-American who told me why he refuses to recognize the existence of Israel.

He said that in 1948 his father, as a boy of 6, was tied to a tree by Jewish soldiers and forced to witness the murder of several uncles and cousins. His father was spared because he was below the age of 12. The man I spoke to told me he hated Jews with a vengeance and was happy to describe himself as a racist. He hated his adopted country, America, for supporting Israel. He had it in for England, too, for having the idea of a Jewish homeland in the first place, though I mentioned the King David Hotel murders.

He may have been embroidering his story, or it may have been embellished in the telling over the years since 1948. The estate might not have been so big, though he seemed well set up and of independent means. He may have been lying. I have heard that Palestinian Arabs often tell inaccurate stories about the 1948 War. Or he might have been telling the truth (the Jewish forces in 1948 did commit war crimes). In any case, his refusal to recognize Israel’s right to exist is surely understandable.

“I”m irked by all attempts to silence discussions by accusations of racism, sexism, or homophobia. “

This is all very topical because this weekend everyone in England is discussing when dislike of Israel becomes anti-Semitism. This question bores me very much, because it is about silencing debate, but I throw in this story for the record.

A lot of British politicians in the Labour Party are being accused of anti-Semitism, which is fun, as they love accusing others of racism. But some of what is being said is nonsense.

I am irked by attempts to say people who dislike the Jewish state’s policies therefore dislike Jews. I”m irked by all attempts to silence discussions by accusations of racism, sexism, or homophobia.

One British Labour MP (a Muslim) has been suspended from his party because he called Israel a terrorist state and likened it to ISIS. This remark was in bad taste but should not be unacceptable or borderline illegal. But almost all heterodox views on important issues are borderline illegal in the U.K.

Had the Arab states succeeded completely in their aims in their wars against Israel in 1967 and 1973, Israel would have ceased to exist. This does not, in my opinion, mean that people who backed the Arab states in those wars were necessarily racist. To say that they were is to say that the Arab point of view from 1948 until the Camp David Accords in 1978 was racist. Which is an arguable point of view, but not one that everyone must accept.

On the other hand, while dislike of Israel’s actions and policies is absolutely permissible, there is a real and very worrying resurgence of anti-Semitism in England and in Western Europe (in Eastern Europe it never went away). One reason for hostility toward Israel is that Mr. Netanyahu and his predecessors have done many things that are objectionable. Some bigger reasons are anti-imperialism, postcolonial guilt, and European self-hatred. Other reasons, probably less significant so far, are that many Muslims in Western Europe do not like Jews and that those Muslims have votes.