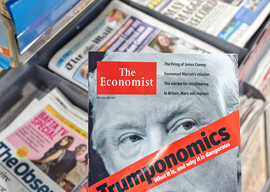 President Trump will not be impeached.

At least, if congressional Democrats, after retaking Congress in November, are shortsighted enough to begin the impeachment process, the media will turn on them faster than a gaggle of self-serving female senators turned on Al Franken.

That’s because the fourth estate has a fruitful symbiosis with the man currently occupying the Oval Office. All the moral preening done by smug journalists in the White House briefing room is just that: melodramatic acting on screen. The sanctimonious prattle about norms and integrity are worn-out script lines, painfully and insincerely regurgitated from the era of Lippmann and Schlesinger.

In the age of social publishing and monetized clicks, journalism is cheap, high school theater. And no one thrives in a pin-spot-illuminated environment better than a former reality TV star and tabloid monster.

Trump is the grand master of media manipulation. Compared with other political figures, he is nonpareil for ratings. The press can’t help but cover everything he says, does, thinks, and breathes.

“The fourth estate has a fruitful symbiosis with the man currently occupying the Oval Office.”

Thus, the press pushers know that honestly pursuing impeachment is career suicide. So they play the game, hinting that Trump’s presidency is just days away from sinking, and suggesting that Robert Mueller’s probe into Russian collusion is pricking holes in the hull of Trump’s barely buoyant administration. Headlines create the illusion of a smoking gun.

While the FBI has been investigating the Trump campaign for Russian cahoots for almost three years now, no serious journalist believes that Trump was hiding an ancient Samsung flip phone on his person with a line straight to the Kremlin this whole time.

To admit as much would end the ratings ride that dying outlets need in order to survive.

As always, it all comes down to money. In a recent Buzzfeed report titled “It’s A Good Time To Be A Reporter Covering Trump If You Like Money And Going On TV,” reporter Steven Perlberg explains the obvious: The tweeter-in-chief is a boon for the news business. “A media renaissance has juiced salaries for those who can break news about characters in the Trump orbit, thanks to their sourcing on the most intensely followed beat in the world,” Perlberg writes.

Cable news is making many print journalists far more wealthy than they ever thought they’d be. Networks are handing out “contributor” titles to aspiring scribblers to the tune of $30,000 to $50,000 a year. That’s on top of their current reporting salary. Some journos are well-connected enough to earn six figures just for popping up on screen from time to time.

Trump’s taste for the tube makes TV hits all the more valuable. The same goes for the televised White House briefing, which is less an opportunity for public enlightenment than a circus of wild beasts all performing for treats before the camera. The briefing room has helped make stars out of boorish antagonizers like CNN’s Jim Acosta and Brian Karem of Playboy, who fake earnestness in the form of badgering whichever poor soul assumes the podium on any given day.

Then there are the book deals. Michael Wolff, the cretinous louse of a reporter, made big money for his half-fabricated exposé on West Wing palace intrigue. Wolff’s was preceded by a handful of best-sellers like Devil’s Bargain by Joshua Green and Unbelievable by Katy Tur, each with their own take on Trump’s unlikely rise to power. Even James Comey, the FBI’s own Tin Man who, for want of the people’s heart, squealed on his boss, made a killing off his book about Trump’s personal tics.