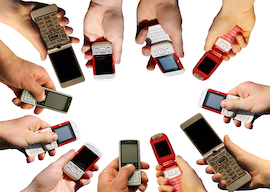 NEW YORK—David Niven’s younger son Jamie, now an old man like yours truly and a bit overweight, approached my table and announced he had seen a video of me lunching elsewhere with two friends. He said this in front of two ladies I was with, one of whom has in the past raised issues, namely the wife. Luckily the video showed me with the designer Carolina Herrera and her husband, who are social friends, so after a pregnant pause Jamie Niven said goodbye and left. It was the end of the story, and for once I was doing something innocent, like having lunch.

Thinking back, however, I am outraged. Someone I don’t know, and most likely have never heard of, points a smartphone and films away, monitoring my every move for strangers’ eyes. They then post it online for anyone to see as if I were a world figure. I am neither a trained seal, nor an actor, nor am I a public person like a politician, but one who treasures my privacy. When you think of it, it should be illegal, even a punishable-by-prison offense. Privacy, along with health, is our most precious of gifts, and once upon a time we were able to control the former, Garbo-like. No longer. Technology is to privacy what Netanyahu is to Palestinians. I want no part of the “selfie” life, it’s designed for and lived by half-wits and morons.

I know I sound old, but I am old, and old is not necessarily wrong when it comes to certain things. Like privacy or face-to-face contact, something that no longer takes place among the young. I’ve dated some pretty beautiful women in my time, but have never spent hours drooling over a machine talking to them. No screen can replace proximity to your heart’s desire. You young whippersnappers don’t know what you’re missing.

“Personally I’d rather be alone on a desert isle than look at that bloody screen all day.”

Living one’s life online must be awfully depressing. Personally I’d rather be alone on a desert isle than look at that bloody screen all day—that is, as long as I have a Friday to cook the fish I catch and do the cleaning up. I’d split the coconuts with a karate strike, do wind sprints on the beach, swim, and read books all day. A weekly female visit would be de rigueur. But no smartphone or any screen device under the penalty of being fed to the sharks.

And it gets worse. Some Silicon Valley billionaire asshole recently announced that “You have no privacy, so get over it,” but if I could get this creep on my desert island I’d love to use him as a makiwara and punch and kick all that crap he’s made of out of him. People have gone nuts, share-crazy, most-exposed nuts. This, of course, means the end of cheating, or illicit love, as I prefer to call it. Just think what great history we would have been deprived of if technology existed since time immemorial? Menelaus would have cut off Paris’ you-know-what in time and we would have never had the Iliad or the Odyssey. Caesar would have listened in on the plotters and shown them the film before he cut them down. And Josephine would not have dared to cuckold the great Napoleon. And speaking of great events, we’d know for sure who the headless man was with the Duchess of Argyle. Oh well, it’s going to get much worse, no ifs or buts about it.

When mobile telephones first began making the rounds, I was informed that they could break up the happiest of marriages by giving away one’s location. I never bothered to find out if that was true because—like gangsters of old—I use pay phones when calling women not my wife. This old prophylactic habit has grown into a hysterical aversion to smartphones and those using them. Excessive info creates its own apathy to news, a sort of blindness. And with new technology all we get nowadays is an excess of news.

And I hear that a new device will soon be installed in every door and room, and film nonstop. Can you imagine a life constantly under the scrutiny of a device that films everything, which can then readily be viewed by everyone? I’d rather be on Devil’s Island under the scrutiny of a few screws. The nerds who invent these privacy killers say it is in the name of security. What bullshit. Banks had cameras even in the good old days of Bonnie and Clyde, and that’s when masks were invented. So what are you going to do? Wear a mask when the girlfriend or wife’s away and pretend someone else was using the bed? The nerds who invent these annoyances don’t care, they’re exhibitionists-cum-narcissists.

The byword is “transparency,” and I totally reject it, although if I weren’t writing for the gentile folks of Takimag I’d use different phrasing. Here you had that greedy slob Zuckerberg selling the digital privacy of hundreds of millions who naively trusted the bum, and also selling children’s data and tracking people’s movements, and the guy is walking around free and unharmed. Remember when the Russians lived ten in a room with a simple sheet hanging between families in the same room for privacy? We’re heading back to those days, thanks to the tech giants run by those good-looking people out west. Think about it and weep, but before that, get rid of the smartphone and feel free again.