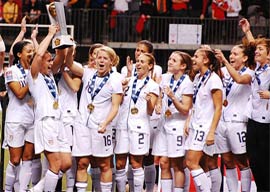 We’re supposed to be excited that the American women’s soccer team recently won the World Cup. But just as very few people who aren’t Canadian care about Canada, very few people beyond women and a select few gelded males care about women’s sports. And from my observations, very few Americans who care about America actually give a hoot about soccer.

But almost without question, the USA men’s team, as lousy as it is compared to other men’s teams around the world, would obliterate the women’s team if they were to play one another. After all, two years ago a group of under-15 males from Dallas beat the USA women’s team 5-2 in a scrimmage game.

But because the Gospel of Equality has replaced the Gospel of Christ as our official cultural religion, we are required to believe that women are athletically equal to men—despite all the evidence.

“Men are hilarious,” tweets a black lawyer with the stereotypically ridiculous name of Exavier Pope at any man who dares suggest that women are inferior to men in sporting events:

Any WNBA player would break your ankles.

A professional woman MMA would kick your ass.

A pro woman soccer player would also break your ankles.

A woman pro tennis player would summarily dismiss you in a few minutes,

I would assume that if he’s actually a lawyer, Mr. Pope is more intelligent than the lion’s share of those who have genetic roots in the bottom half of the Dark Continent. But either he’s being disingenuous here or he simply doesn’t understand the law of averages. Just because Oprah Winfrey is wealthier than 99.99% of white people doesn’t mean that whites and blacks enjoy a similar per-capita income, nor that all blacks are billionaires. Simply because pro female athletes may be able to best the average male in their chosen sport does not in any way mean that we’ve reached, or ever will reach, athletic parity between the sexes.

“Segregating the sexes in sports is not unfair to women—if anything, it’s exceedingly kind.”

It’s like arguing that since world champion women’s tennis player Billie Jean King beat 55-year-old Bobby Riggs in 1973’s famed “Battle of the Sexes,” somehow women and men would compete equally if tennis were to be desegregated along gender lines.

Segregating the sexes in sports is not unfair to women—if anything, it’s exceedingly kind.

But equality is a hill that many true believers are willing to die on, no matter how foolish it makes them look.

“The problem is, ‘boys are better at sports than girls’ is an argument that’s fucking bullshit,” says a guy who, truth be told, looks like most women would beat him in every athletic competition known to man. He attempts to argue that the reason for this is that most sports were designed by men and are thus “rigged.” You see the same bumbling attempts at argumentation by people who argue that IQ tests are rigged in favor of whites, despite the facts that whites fall somewhere in the middle of the bell curve on intelligence tests. In both cases, it would behoove these flailing egalitarians to encourage blacks to design intelligence tests in which they outperform everyone else and women to devise sports in which they outcompete men. So far, this hasn’t happened.

In a 2017 article for The Guardian, professional female golfer Anya Alvarez concedes the undeniable fact that men “are stronger than women” and that their average golf swing is about 18MPH faster than the female average. She says that despite these male advantages, “suggesting that makes females lesser athletes is ridiculous.” Then she compares the stats of select female pro golfers against that of select male pro golfers without stating where they stand in the rankings of their respective genders.

But in 2003 when Annika Sorenstam—widely acknowledged as one of the all-time great female golfers—competed in a gender-blind tournament against men, she ranked 96th out of 113 competitors.

An article in Duke Law examines track and field events for 2017 and cites how many times that year’s world-best performance for women was bested by boys under 18. There wasn’t a single event in which the best woman in the world wasn’t bested by at least 10 under-18 boys; in the 400-meter dash, 285 boys outperformed the world’s fastest woman.

When compared to adult males, it looked even worst for the gals: In 2017 alone, the best woman’s result in the 100-meter dash was beaten over 10,000 times by men; in the 800-meter race, men outperformed the best woman’s time in the world nearly 14,000 times.

In 2010, an Israeli physicist named Ira Hammerman gave a presentation comparing men’s and women’s world speed records in both individual and team sports over short distances and long distances. Examining 82 different events over six sports, he found that the average difference between all world records was that women took about 11% more time than men to reach the finish line. Since the average difference between the best and worst performer in running events is about 2.3%, this means that the best woman in the world would have been far behind the last-place finisher in every single men’s event.

When it comes to men’s and women’s power-lifting world records, the listing for actual world records doesn’t even specify men because it’s assumed that men hold every record; it simply says “World Records.” The male record for squats is 542 pounds heavier than the female record. The pattern persists throughout all categories: It’s 415 pounds heavier for deadlifts, 298 pounds for bench presses, and 810 pounds for one person’s totals in all categories combined. In three of the four women’s categories, the world champeen is an American named April Mathis.

April Mathis was born a man and still looks like one, complete with the pattern baldness. So the best “female” weightlifter of all time is actually a man.

If you’re truly concerned about being fair to women, you should forbid male-to-female trannies from competing against them in sports.