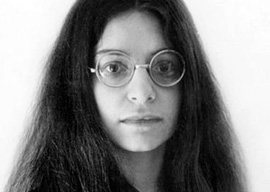 I was certain I still had my copy of the book on the same shelf as my long-untouched copies of The Second Sex, The Female Eunuch, and The Feminine Mystique. After learning of the death last week of Shulamith Firestone, author of 1970’s The Dialectic of Sex, I roused myself to search for the book, with its inexplicable cover (a Degas portrait…really?) but ended up with empty, if dusty, hands.

Her first and most important work is still required college reading, but unlike those of her second-wave feminist peers”Greer, Friedman, and Gloria Steinem”Firestone’s is not a familiar face. She never turned up on The Phil Donahue Show or in the gossip pages or on Henry Kissinger’s arm.

And yet in the photo accompanying her New York Times obituary, Firestone looks exactly like you”d expect. That “look””the frizzy hair, the Lennon spectacles, the lipstick-free, unsmiling mouth”transcends eras. Firestone eerily resembles one of my old Reagan-era anarcho-peacenik comrades”also crazy, also brilliant”who helped me block consensus when some other chick in our women’s caucus proposed dropping the word “caucus” because “it has the word “cock” in it.”

Firestone published her radical manifesto calling for the liberation of women from childbirth’s unfair burden”and from gender itself”at only 25. That’s around the age when schizophrenia tends to claim its victims, of which she was one.

The Dialectic of Sex proposed that, contra Marx, the key class struggle is between man and woman rather than owner and worker. Citing alleged discoveries by Professor John Money of Johns Hopkins, Firestone declared sexual identity a fluid and artificial construct. She declared:

[T]he end goal of feminist revolution must be…not just the elimination of male privilege but of the sex distinction itself: genital differences between human beings would no longer matter culturally.

Furthering those ends, communitarian daycare centers would replace the nuclear family. Marriage was a patriarchal trap and childbirth a cruel cosmic curse”as, she notes, even the Bible tells us.

Born to Orthodox Jewish parents, Firestone came by her Old Testament knowledge honestly. Whether or not her genetic heritage was also one of the sources of her schizophrenia“or, for that matter, whether the “schizophrenia” of the 1970s bears any relationship to the disease called by that name today”I”ll leave to those more knowledgeable.

What is obvious is that yesterday’s mental illness is today’s social policy.