Feminists to Trannies: Stay off our TERF 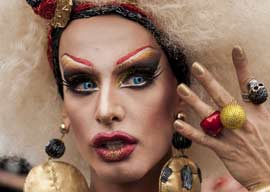 As a connoisseur of leftist cannibalism, I enjoy watching the internecine squabbling of groups competing for the top spot on the hierarchy of oppression as if they were puppies stepping on one another’s necks straining for a tug on the warm teat of sympathy.

Male-to-female transsexuals”who, as luck would have it, have always constituted the vast majority of those who feel they were born wearing the wrong genital costumery”have recently emerged as perhaps the most rabidly militant of all identity groups strung along the vast fractured progressive rainbow. In their manic quest to force the world into parroting the obvious lie that they are women, they have stumbled upon an unexpected foe”radical feminists who have real, God-given vaginas.

This is a struggle”laden with a hilarious level of acrimony”between men who insist they”re women and women who insist that the most crucial part of being a woman involves popping out of your mother’s vagina with a vagina of your own. The latter group is disparagingly referred to as TERFs“Trans Exclusionary Radical Feminists”due to the fact that they feel male-to-female trannies are trying to party-crash their struggle against historical oppression. The TERFs argue that for men to pretend they”re women is insulting to real women. To them, it is a genital form of blackface.

“Leftist intersectionality has devolved to the point where real women and fake women are arguing over whose vaginas smell worse.”

The TERF worldview can be loosely summarized as follows: So-called “trans women” are actually privileged males who use such privilege in an attempt to co-opt women’s historical suffering without enduring any of the social stigma attendant to bleeding for five days a month without dying. They are essentially delusional men who wear dresses or, in some cases, mutilate their genitals in a near-suicidal quest to validate their delusions. Trannies should under no circumstances be able to use women’s bathrooms or attend events that are exclusively designed for women. For trannies to invade such female-designated “safe spaces” is at best intrusive, at worst yet another form of rape. Since “gender” is a social construct and “femininity” is a patriarchal imposition, transsexuals are merely reinforcing anti-female memes by aping sexist stereotypes of how women should behave. Therefore it is they, and not the TERFs, who are the true reactionaries.

Robert Anton Wilson famously said, “It only takes 20 years for a liberal to become a conservative without changing a single idea.” Whereas those who would now be defamed as TERFs were on the far bloody cutting edge of leftist politics a generation ago, they now find themselves outdated or, as the kids like to say, “irrelevant.” Without having changed a single idea, they find themselves labeled not as bold freedom warriors fighting the good fight against oppression but as hateful reactionaries who stand in the way of true progress.

One especially amusing bone of contention between the two groups of shaggy yipping poodles regards the vaginal authenticity of male-to-female transsexuals. Old-school feminist Germaine Greer recently asserted that trannies aren”t women because they don”t realize what it’s like “to have a big, hairy, smelly vagina.”

Although British feminist Sheila Jeffreys“known as the “British Andrea Dworkin” and born with a face that is nearly as objectionable as Dworkin’s“is aligned with Greer in her belief that transsexuals are not legitimate women, she argues that their manmade vaginas are actually smellier than those of natural-born females:

The newly carved-out orifices of male-bodied transgenders do not resemble vaginas [and] create new microbial habitats in which infections develop and cause serious smell issues for their owners.

To my knowledge I have never sniffed a transgender vagina, nor do I intend to, so I cannot speak from personal experience whether or not Jeffreys is correct. I am merely noting”with a tremendous amount of inner joy”that leftist intersectionality has devolved to the point where real women and fake women are arguing over whose vaginas smell worse.