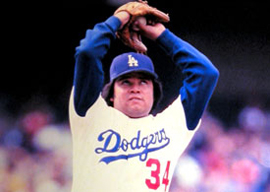 With the Census Bureau announcing this spring that the number of Hispanics in America has surpassed 50 million”a large majority of them of Mexican background”it’s worth remembering the “Fernandomania” that swept the country 30 years ago.

America held only 15 million Hispanics when Fernando Valenzuela, a 20-year-old rookie Los Angeles Dodgers baseball pitcher from Mexico, started the 1981 season with eight straight wins, five of them shutouts. (In contrast, the 2010 Dodgers chalked up only four shutouts over 162 games.) Whenever Fernando pitched, attendance would soar as Latinos and others rushed to the ballpark to cheer on the uniquely charismatic phenom.

To young fans who only know Valenzuela from his statistics, it’s hard to understand his fame. Even in his 1981-1986 prime before his arm wore out from too many screwballs, Fernando’s stats were good but not great.

That he couldn”t (or, at least initially, wouldn”t) speak English only added to his mystique. His pudgy physique increased his Everyman appeal. Pitching never came easy to him. He labored on the mound. His elaborate windup, in which his eyes rolled back like a Baroque martyr offering up a last prayer, was designed to put the maximum possible torque on his screwball. Constantly behind in the count with men on base, he pitched himself out of innumerable jams. His World Series-saving win over the New York Yankees in 1981 was as melodramatic as any telenovela. Starting on short rest, Valenzuela allowed 16 baserunners but still somehow went all the way to triumph.

“In an American celebrity culture with so many yapping, who counts the quiet?”

I recount this ancient history because it illuminates the curious question of why there are so few Mexican superstars today in any branch of American popular culture other than boxing. Sure, there are stars”actress Eva Longoria of Desperate Housewives, third baseman Evan Longoria of the Tampa Bay Rays, and others of similar wattage”but why so few superstars, especially in contrast to African-Americans?

The conventional wisdom’s response to this query is fourfold. First (and most common): Failure to notice. As Sherlock Holmes observed in “the curious incident of the dog in the night-time,” it’s hard to discern the dog that doesn”t bark. In an American celebrity culture with so many yapping, who counts the quiet?

Second: Deny the possibility of a Mexican-American shortfall based on first principles. Because it’s axiomatic that a young, growing population injects vibrancy into our culture, it’s simply inconceivable.