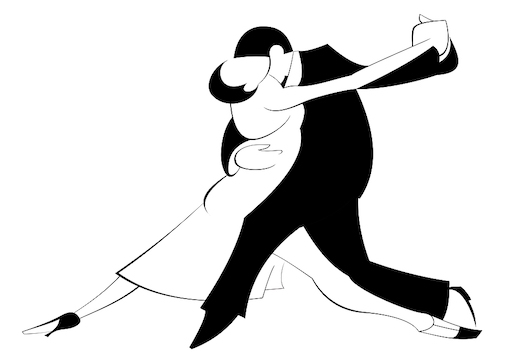 GSTAAD—During these dark endless moments of lockdown, let’s take a trip down memory lane of real high life, of parties galore, of carefree times with girls in their summer dresses, and of drunken dawns playing polo in dinner jackets. Creatures began to move properly about 500 million years ago, but I will only take you back some fifty or so years, when chic creatures moved to the beat of the samba, the tango, the waltz, and the cha-cha-cha. The roaring twenties roared because of the Great War’s predations, and the fabulous ’50s became fabled recovering from WWII. People ached to have a good time, to splurge, to let go, hunger and postwar austerity having turned even Paris into a gloomy, cold place.

By the mid- to late ’50s things had changed, and I hit the ground running. I was 20, was ranked in tennis, and had been locked up in school for half my lifetime. After the horrors of war, or boarding school, the search for a good time is natural. The reconstruction of Europe had taken more than a decade, and I remember American tennis players complaining about the lack of showers and hamburgers when visiting for Wimbledon in the mid-’50s. Then the Italian, German, and, to a lesser degree, French economic miracles took place and it was party time.

Back in those halcyon days, social distancing meant no cheek-to-cheek dancing in Parisian debutant dances called “Rallies.” Then the grown-ups started giving balls, as country houses physically run down during wartime were refurbished and put to good use. The first great international party that I attended was at the Palazzo Serra di Cassano in Naples, given by the duke and duchess Serra to commemorate the Rome Olympics of 1960. Many crowned and uncrowned heads of state were present, but I remember little as I got very drunk with Leopoldo Serra, the youngest in the family, as we began to celebrate early after breakfast when the crown prince of Greece, Constantine, won a gold medal in yachting. (Onassis got so excited by the Greek victory, he ran into the showers fully clothed and embraced a naked Constantine, getting himself drenched in the process.)

“The rich and the aristocracy felt safe enough to splurge, and what better and more elegant way to do it than giving a ball?”

A superlative week followed, having sailed up to Rome on the Agnelli boat and ensconced myself at the Grand Hotel. Suetonius would have loved it. The high and the mighty had been grounded for years, and suddenly every aristocratic Roman terrace was filled with celebrants. The weather was perfect, the temperature ideal, and the guests the best the eternal city had to offer. The exhilaration one felt was matched only by the energy of youth. The best-looking, most spiritual, most poetic, and most successful seducer of Rome, Prince Dado Ruspoli, opened up his palazzo and threw a ball that I shan’t soon forget. Dado invited only very beautiful young women and men of his class, and he managed to pull it off. Never have I seen so many handsome creatures, dancing the night away in his candlelit Roman palace. No models, no actresses, no celebrities, no gossip columnists, no nouveaux riches Philip Green types, certainly no paparazzi, and after sixty years it’s still THE ball to remember.

Once the French had tired of shaving women’s hair for horizontal collaboration with the conquering Germans, and de Gaulle had returned to power in 1958, the rich and the aristocracy felt safe enough to splurge, and what better and more elegant way to do it than giving a ball? The Rochambeau dance, the Agnelli one at the Bois de Boulogne, and the two balls that Guy and Marie Ellen de Rothschild gave in their chateau outside Paris come to mind. My friend and polo mentor Porfirio Rubirosa owned one of the most charming houses just outside Paris. It took ten minutes to drive from the polo in the Bois to open country where his house was, the most ideal location imaginable because he lived in the country but was a fifteen-minute drive from a Parisian nightclub.

Rubi used to regularly give parties at home. Inside his large drawing room, which opened up onto a vast lawn and looked upon miles of fields, he would install a small orchestra of four or five or six that would play nonstop throughout the night. The host had a canny ability to raise a party mood to almost orgiastic levels, and he invited only young good-looking people with impeccable manners. His party for Frank Sinatra was a milestone, Ol’ Blue Eyes announcing that had he known such beautiful people existed in Paris he would have skipped Los Angeles, Las Vegas, and New York.

Rubi and I played polo at the Bagatelle club in the Bois de Boulogne ten minutes from his house. After every match there would be a party at the club, and on special occasions the dawn would find us playing in black tie and without helmets. No one was ever seriously hurt. The practice was stopped only after a drunken Argie galloped into the clubhouse wildly swinging his mallet against the furniture.

A couple of Badminton balls, the Venetian dance Greville Howard threw, Tim Hanbury’s bash in France, the Greek royal wedding in London all come to mind as milestones of elegance and fun. The end of elegance was quick and to the point: Sponsorship of parties for charity meant vulgar new rich social climbers could become household names overnight. Fade out.