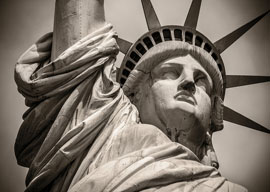 In the immigration debate, the conventional wisdom is that the solution to millions of “undocumented workers” is for the government to print up documents for them.

That always reminds me of a pivotal scene in Evelyn Waugh’s prophetic 1932 novel Black Mischief. After observing Haile Selassie as crowning emperor of Abyssinia, Waugh wrote a tale of an African monarch attempting to renovate his realm through an ambitious One Year Plan that was the most accurate fictional portrait of 1970s Africa until John Updike’s 1978 novel The Coup.

The Emperor Seth’s downfall begins when he learns that for a modest fee he can have printed in Europe millions of pounds of paper money with his picture on them. The monarch explains to his aghast Minister of Modernization, Basil Seal:

You see there were a great many things which needed doing and I had not a great many rupees….Pretty fine picture of me, eh? I wondered about the hat. You will see that in the fifty pound notes I wear a crown.

Seal attempts to outline to Seth the principles of monetarist economics (such as that, all else being equal, increasing the supply of money decreases its value), only to give it up as hopeless. “I knew you would understand,” says the Emperor. “It is so simple. As soon as these are used up we will send for some more.”

“The notion that American citizenship has a cash value is not a concept that comes readily to the minds of idealistic Americans.”

This ignorance of the law of supply and demand may seem derisible today, but the topic is esoteric enough that we should have some sympathy for the many politicians in the decades after World War II who cranked out too much fiat money.

While governments had long understood that counterfeiting currency in your basement robs the public, the temptation to bloat the money supply legally was hard for governments to resist in the post-gold-standard era.

Thus, the 1970s were a decade of stagflation in America and worse in Britain. (The foremost exception to this inflationary decade was Germany, which had learned its lesson from the Weimar Republic’s hyperinflation of 1923 that wiped out savers, with unfortunate political consequences).

And yet the human race sometimes learns from its mistakes. Retail price inflation, which was a major economic curse of my young manhood, has been reasonably under control in much of the world in recent years. (Asset price inflation, however, is a different story, as the late housing bubble indicates.)

While Zimbabwe (whose 89-year-old ruler, Robert Mugabe, was reelected last week) experienced hyperinflation so ludicrous (an estimated 6.5 sextillion percent at its peak) that it has not had a national currency since 2009, it’s now the exception rather than the rule. Zimbabwe’s neighbor South Africa, for example, currently has an inflation rate of 5.5 percent. And Mexico’s is only 4.1 percent.

Unfortunately, while people can learn from painful experiences, we”re not very good at drawing analogies. It ought to be readily apparent that Marco Rubio’s push to print up documents for millions of undocumented illegal aliens and tens of millions of new immigrants is similar to the discredited Juan Peron/Salvador Allende school of economic management.