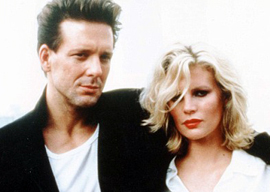 Now that I have been sucked into the vortex that is the Fifty Shades of Grey trilogy, I am beginning to understand that women want the dude to be in charge, and apparently that’s hotter than equality. When a female friend told me she thought that “men should read the book because frankly, most of you can’t dance or screw for shit,” I got to thinking. What is a poor girl to do when her boyfriend can”t give her an orgasm and never strays from the missionary position? This is a weird world where women need to read a book that articulates what they actually want. Then after reading the book, they are required to assume the man’s role and hold their bumbling male lover’s hand and walk them through each step.

Despite all the “grrrl power” nonsense touted by a few loud and loveless grrrls since the 1960s, you can”t change basic biological drives. What women want from men has always been a combination of domination and sensuality. They want to be Kim Basinger in 91/2 Weeks and they want you to be Mickey Rourke.

“What women want from men has always been a combination of domination and sensuality.”

Poor chicks. When they aren”t bossing their men around, they want men to be in charge behind closed doors. Even nice girls think about sex all the time”probably more so because they have no satisfaction in real life. But where to begin?

I went to my local bookseller a few days ago to seek the answer. Embarrassed to be seen purchasing the erotic novel that has had every soccer mom from here to Vladivostok yearning to be softly squashed under a sexy man’s thumb since the book came out last year, I told the young man at the counter it was purely for research purposes. He smiled and told me he was amazed by how many men were buying the book. I walked out of the store concealing Fifty Shades of Grey in a brown paper bag as though I were boozing it up on a Monday morning.

When I got home that evening I started reading. Though I wasn”t impressed with the first few pages I found I had read 150 of them by the time I had to head out for dinner. The next day I boarded a flight for a short trip, book in hand. I was embarrassed to be seen with Fifty Shades, but I couldn”t put it down. I wrapped my body around the paperback so people on either side of me couldn”t see what I was reading.