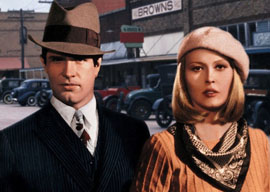 I haven”t cared about the Oscars since 1992’s Silence of the Lambs sweep. Like, I presume, 99 percent of Takimag readers, I won”t be tuning in on Feb. 26, when one of the broadcast’s “highlights,” we”re informed, will be the choice of Best Picture presenters: Warren Beatty and Faye Dunaway.

See, this year marks the 50th anniversary of the movie that made them stars and altered the course of American cinema, and culture: Bonnie and Clyde.

The subsequent 1968 Best Picture short list was such a freak show”how could anything that ghastly year be otherwise?”that it inspired an entire (fine) book by Mike Harris called, aptly, Pictures at a Revolution:

The Best Picture lineup was more than diverse; it was almost self-contradictory. Half of the nominees seemed to be sneering at the other half: The father-knows-best values of “Guess Who’s Coming to Dinner” were wittily trashed by “The Graduate”; the hands-joined-in-brotherhood hopes expressed by “In the Heat of the Night” had little in common with the middle finger of insurrection extended by “Bonnie and Clyde.”

That the fifth nominee was the movie equivalent of the embarrassing elderly aunt you”re forced to invite to the wedding, Doctor Doolittle“an “old-fashioned family entertainment” forced-march flop that cost its Big Studio “twice as much to produce and promote as the other four combined””adds just the right dollop of sour, zeitgeisty zest, no?

“In patented boomer fashion, Beatty, his colleagues, and his admirers adopted a moralistic tone about an immoral subject.”

But note: Bonnie and Clyde didn”t take home the golden statue that evening. In the Heat of the Night did, possibly because (I risk arousing the wrath of Price Waterhouse here) Martin Luther King was assassinated right before the ceremony, which prompted a brief, respectful postponement (and, just maybe, time and motive to switch the winner from, say, the highly Caucasian The Graduate to The Less Embarrassing One With Sidney Poitier. Look, a movie like Guess Who’s Coming to Dinner had to be made in 1967. Unfortunately, the movie that got made was…Guess Who’s Coming to Dinner.)

Yet it’s Bonnie and Clyde that’s being singled out this Sunday night.

The film so divided critics upon its release that one critic divided himself, first panning the movie, then penning an apologetic retraction in Newsweek‘s next issue.

By the time it was nominated, all the best people”nudged along by rising critical stars Roger Ebert and, especially, Pauline Kael“agreed: Bonnie and Clyde was a masterpiece. The considerable initial dissent was “disappeared”: Chicago columnist Mike Royko’s piercing paean to the real Bonnie and Clyde’s flesh-and-blood victims (“They shot my father to pieces,” one lawman’s son recalled) was roundly mocked”didn”t he Understand Anything About Art?”so he followed up by pitching a new “Art” film, called Evie and Ade. After almost 30 years at The New York Times, where he”d made all the right noises about civil rights, censorship, and McCarthy, the once all-powerful Bosley Crowther condemned Bonnie and Clyde three times”and was abruptly replaced.

In his review, Ebert boldly and accurately predicted that “Years from now it is quite possible that Bonnie and Clyde will be seen as the definitive film of the 1960s.” But in 2008, leftist historian Rick (Nixonland) Perlstein went further:

My theory is that “Bonnie and Clyde” was the most important text of the New Left…. It made an argument about vitality and virtue vs. staidness and morality that was completely new, that resonated with young people in a way that made no sense to old people. Just the idea that the outlaws were the good guys and the bourgeois householders were the bad guys”you cannot underestimate how strange and fresh that was.

In patented boomer fashion, Beatty, his colleagues, and his admirers”when defending the picture”adopted a moralistic tone about an immoral subject; that now-familiar voice they”d so far reserved for their sex-and-drugs propaganda was now put to use normalizing violence.

Besides the fact that tens of thousands of Americans, from emergency-room nurses to armed-forces vets, already knew what real violence looked like better than two guys from Esquire and a pussy-hound matinee idol, a moment’s reflection reveals”you”ll never guess!”that Beatty & Co.’s “authenticity” relied just as heavily as any corny “old-fashioned” movie on artifice. Sometimes even more so if you consider the unprecedented use of hidden squibs to pull off the notorious “dance of death” finale“which, note, is shot in ultra-natural, hyperrealistic, er, slow motion.