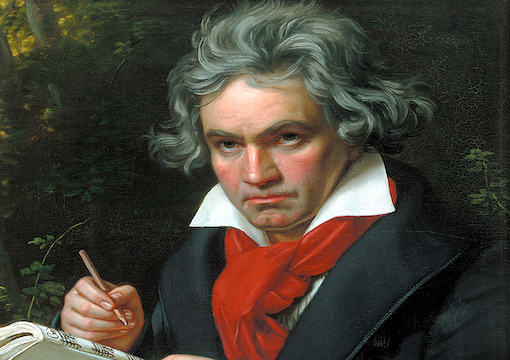 Back in the days when skin tone was not a criterion for worthy art, I used to attend the opera quite regularly, especially when Mozart, Verdi, or Puccini works were on offer. I mention skin tone because a black American so-called academic, Philip Ewell, claims that Western classical music is rooted in racism. Phil also thinks that Ludwig van Beethoven is kinda useless, and that our reverence for classical music is just an expression of white supremacy. So what else is new?

I’ll tell you in a jiffy: According to the obviously oxygen-deprived brain of Philip Ewell, old Ludwig has had his reputation propped up by “whiteness and maleness” for 200 years. What the moronic Phil doesn’t realize, however, is that poor old Beethoven has had many black academics rooting for him for many a year, namely because they believe Ludwig had black blood in his veins. Mind you, Beethoven had no more black blood flowing in him than I do, but was often painted in dark colors, probably in order to reflect his moods, which were at times black because of his lack of hearing. Beethoven’s ancestry was Flemish, and there is absolutely no evidence whatsoever that one of his ancestors had an affair with a Moorish servant, as the black academics seem to hint. Worse, these same academics insist that his music reflects African rhythms. This really takes the cake. “The Moonlight Sonata” has an African beat? (The good news is, as long as “they” think Ludwig was black, his statues are safe, like George Floyd’s in New York’s Union Square, where the career criminal’s has just been unveiled.)

“George Orwell must be turning over in his grave in frustration. ‘Why didn’t I think of this?’ he must be saying to himself.”

Well, it’s a free country, at least if one’s black, Asian, or Hispanic. Whites have to be very careful what we say and do, but our English cousins are way ahead of us. Over in Blighty, the increasingly common view in musicology is that in the 19th century musical works were the product of an imperial society and that the classical-music canon must be decolonized. A first step of decolonization is to stop teaching music by Beethoven and Wagner.

Well, what can I say, except that in the theater of the absurd that we’re living in at the moment, once Wagner and Beethoven are out, current living conditions for the socially, sexually, and racially underprivileged will improve. This is what is taught nowadays in certain British schools, so God help us. Not only are the lunatics running the asylum, they are also making the rules for the rest of us. George Orwell must be turning over in his grave in frustration. “Why didn’t I think of this?” he must be saying to himself. And it gets worse. Orchestras in Britain are letting musicians go because of their skin color. The English Touring Opera has dropped fourteen white musicians in order to “increase the diversity of the company.” Aged between 40 and 60, they’ve been told their contracts will not be renewed because of “diversity guidance” from Arts Council England. The Arts Council runs culture in Britain and finances plays, orchestras, and other artistic endeavors. It hands out millions to all sorts of talentless projects and is staffed, you guessed it, by all sorts of lefty bearded men and women and even some normal-looking people. And yes, Boris and the Conservatives are in power with a great majority, but the Arts Council and the BBC are British institutions no one dares lay a hand on to bring about change.

Has wokeness doomed the arts forever? I would say definitely yes, and soon I am afraid we will reach the point where only black people will appear on stage and screen. Whites will only play very bad people, for example Charles Manson, and I also think the Nazis are safe and will be portrayed by white actors. Not to be undone, publishers are also falling in line. Back in 2018 Penguin Random House sent stern notices to all and sundry that they would need to fall in line with diversity targets, diversity being defined by sex, color, and whether one was able-bodied or not. I wonder what Penguin would decide if a young and healthy Hemingway were to submit A Farewell to Arms today? Or Scott Fitzgerald dropped a manuscript of Tender Is the Night and The Great Gatsby in their offices? There are no transsexuals in any of those books, and blacks and homosexuals are also absent. And both Papa and Scott were known to drink too much and like women. With art being judged nowadays by the biography of the artist, both writers would get a rejection slip and a letter encouraging them to seek help.

But back to music and opera and what a genius like Philip Ewell could do with, say, Don Giovanni or better yet La Bohème. The Don’s role could easily be that of a black because, like Wilt Chamberlin who claimed to have seduced 20,000 women, the Don’s servant Leporello assures us he seduced 1,003 in Spain, 640 in France, and only 91 in Turkey. Rodolfo and Mimi in Bohème are starving black artists in a Harlem garret. Mimi dies of an infected needle against Covid administered by a careless white doctor. Go get ’em, Phil.