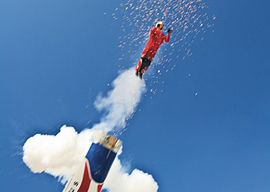 Having recently enthused about Pat Buchanan’s latest book and then about the man himself here on Taki’s Mag, please forgive me one more column about him.

His firing from MSNBC official at last, Pat recorded an interview with Juan Williams the other day for the Fox Latino website. If your preferred Internet viewing is Fox Euro, Fox Sino, Fox Islamo, Fox Indo, Fox Lesbo, or one of the other group-identity Fox outlets, you may have missed the interview. It can be seen in its entirety here.

I”m offering some edited highlights with my own commentaries added. Mostly I”m giving my own answers to questions Juan Williams was asking Pat. The first question is about 6:20 into the interview, with the others scattered through the remainder.

[JD: I honestly have no idea what that word means, and I no longer use it. Since you just did use it, Juan, presumably you do know what it means. So here’s a deal: I will truthfully answer any question you care to ask me about my own attitudes, beliefs, and behavior in the matter of race. Then you tell me if I am a racist.]

“You can have meritocracy or you can have equal group outcomes, but you can’t have both. Which one do we want?”

JW: You say things like “Mexico is moving north.” Do you see those folks as a threat to the American dream?

PJB: (Boilerplate tribute to Mexicans as “hard-working” and “friendly.” Easy with the stereotypes there, Pat!)

[JD: Threat to the American Dream? Yes. The Mexicans we’re getting are a low-mean-IQ population, from the bottom SES levels of a nation that has accomplished nothing in its 500 years of existence. This is bound to degrade the USA’s human capital. Further, Mexican society is rigidly stratified by race. These low SES levels are disproportionately Indian and mestizo, so by admitting them in quantity we are acquiring a new race problem while we continue struggling with the old one. This is dumb. No, it’s beyond dumb; it’s insane.]

JW: Don’t you think that the history of discrimination, particularly in the area of education, but continuing disparities in terms of educational outcomes”in terms of things like income, families, all the rest”the terrible history of slavery and all its consequences”you don’t think that’s a legitimate factor?

[JD: The outcome disparities are a natural and predictable result of racial differences. Races are big old inbred local branches of the human stock, like dog breeds. They are bound to exhibit different statistical profiles on all kinds of traits, including behavior, intelligence, and personality. That’s Biology 101. Those different profiles cause the observed differences in outcome. They are observed in all multiracial societies, even where no history of slavery or oppression has been present: in Malaysia, for example.]

JW: But I’m saying….If you’re from Central America, Latin America, and…you find that there are, given our history, preferences for people who are white in the society….

PJB: Do you think they really loved the Polish folks that came, and the Greeks who came, and the Portuguese”they were all privileged?