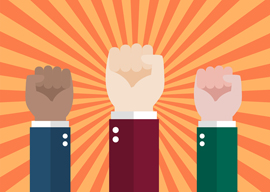 NEW YORK—It’s been a rough year for stump speaking in general, but let’s make a resolution for 2018:

We need to start listening to these White Pride guys in the polo shirts and khaki pants.

And we need to start arresting the Antifa thugs.

Liberals and conservatives alike should agree that the pattern of these events over the past year has become obvious and odious:

The Alt-Right announces a rally, demonstration or speakers program.

Their enemies organize a campaign to “disrupt” the event. That’s the word they use. It’s not counter-programming, it’s an attempt to shut them down. If it were truly a “counter-protest,” they could do it across town, at some other location, where the National Guard wouldn’t be required, or they could do it immediately after the scheduled event.

By the time the event happens, the Alt-Righters are outnumbered anywhere from ten to one to a hundred to one.

Things get nasty. It usually starts when an Alt-Right guy gets cut off from his comrades and surrounded. Somebody knocks his hat off or tries to grab his flag pole or—the biggest prize of all—seizes one of those homemade shields that are normally found only at Renaissance Fairs. If he tries to get away, the bullies lock arms and block his path, all the while screaming at him or spitting at him. They’re trying to get him to throw a punch, so they can commence a group beatdown, but since most of the Alt-Righters have prepared for this, if only in their imaginations, they simply try to push through the crowd. But since pushing through the crowd requires shoving some guy in the chest or holding him at bay with a flag pole, we end up with a YouTube video of a skinny nerd being chased through the streets for ten minutes by 30 angry guys, loaded for bear, often restrained only by their girlfriends. Blood flows.

As soon as somebody throws a punch—or hits somebody with a urine-filled balloon, because projectiles are always raining down on these guys—an illegal assembly is declared and the streets are cleared, sometimes with tear gas and rubber bullets.

Very few arrests are made, usually a couple of dozen. Ninety percent of the arrestees are counter-protesters.

Bottom line: the counter-protesters always win, because nobody ever hears the speaker.

We now know from the 220-page report commissioned by the Charlottesville City Council that, in that notorious case, the police chief decided to keep his officers behind barricades even when they could clearly see physical altercations. His theory was that the situation would get so bad he would be forced to declare an unlawful assembly and tell everyone to leave. Of his two obligations—protect free speech and protect public safety—he went 0 for 2. His only strategy was to make it end quickly.

In most cases, law enforcement ends up congratulating itself because arrests and injuries are held to a minimum.

That’s not the standard of success.

The standard of civic success is this: The speaker finishes his speech and everybody who wants to hear him can hear him.

Most police forces are so poorly trained that they think, if the demonstrators are speaking and not being physically assaulted, then all objectives are achieved. The fact that they’re being shouted down doesn’t seem to be on anyone’s list.

Unfortunately, police chiefs aren’t the only public officials that simply want it to end quickly. City Councils and Governors and City Managers and Mayors, faced with an upcoming Alt-Right demonstration, will almost always try to deny the permit, then force the organizers into an undesirable location, then put a time limit on them, then pass specific ordinances designed to harass them (they wanna make those pathetic Walmart tiki torches illegal!), then shut down the event on the pretext of public safety. All of this occurs without the speaker ever being heard, because, even if he manages to get his speech delivered, he’s drowned out by bullhorns and noisemakers and profane taunts in a virtual textbook case of what the ACLU calls “the heckler’s veto.”

As a result, these White Pride groups have become the Jehovah’s Witnesses of our day. The reason so many of the Supreme Court’s First Amendment decisions involve Jehovah’s Witnesses is that they were a despised minority who could be easily bullied because they were regarded as un-American cultists. (Among other things, they refused to salute the flag or let their children recite the pledge of allegiance.) The Alt-Righters are now a despised minority who can be endlessly bullied because they can be labeled “white supremacists” (some are, some aren’t) while city governments go through the bare minimum of ensuring their free speech rights.

But these people are spouting hate speech!

Yes, many of them are. That’s legal as long as it doesn’t involve clear calls for violence against the assembled crowd. All the calls for violence are coming from the other side. The number of times I’ve heard “Fuck him up! Fuck him up!” on YouTube makes me believe that this one phrase alone should be grounds for arrest.

But these racist organizations are provoking the counter-protesters by the disingenuous nature of their demonstrations and rallies!

Yes, they’re trying to provoke the left. The First Amendment doesn’t say anything about motives. Motives at political rallies are always impure.

But the counter-protesters have free speech rights too!

Yes they do, but their speech has to allow space for the guy who has the legal permit to speak that day. Their right to make noise before the speech and after the speech is absolute. During the speech, not so much. Nor do they have the right to block entry to the public square. A group of clergymen stood at the stairs to Emancipation Park in Charlottesville, locking arms so that the Alt-Right groups couldn’t get to the rally, causing a cop to say “They’re trying to take over the street!” And they definitely don’t have the right to use amplified sound to drown out the speaker.

But an innocent woman died!

Yes she did, and the unhinged extremist who did that should be treated the same way we always treat deranged terrorists. But we shouldn’t ever create conditions where those guys think law enforcement has vacated the premises. (The intersection where it happened was guarded by a single wooden sawhorse. The school resource officer stationed there had expressed fear for her safety and was told she could leave.)

There are so many Supreme Court cases dealing with this stuff—the right of unpopular speakers to use the public square—that it’s hard to choose just one, but probably the best case to talk about in this context is Kovacs v. Cooper. Charles Kovacs was a guy who drove around Trenton, New Jersey, in a truck outfitted with an amplified sound system expressing his views on a labor issue of the day. He was convicted of violating an ordinance against “loud and raucous noises” and thought his free-speech rights were being violated. When the case got to the Supreme Court in 1949, Kovacs lost—with Justice Stanley Forman Reed explaining in the majority opinion that Kovacs had no right to bother “unwilling” listeners in a city of 125,000 people.

But here’s the interesting part of the opinion. Justice Reed went on to say that Kovacs did have a right to access willing listeners. Therefore . . .

“Hecklers may be expelled from assemblies, and religious worship may not be disturbed by those anxious to preach a doctrine of atheism. The right to speak one’s mind would often be an empty privilege in a place and at a time beyond the protecting hand of the guardians of public order. . . . The right of free speech is guaranteed every citizen that he may reach the minds of willing listeners, and to do so, there must be opportunity to win their attention.” (I added the emphasis.)

Many judges since then have used the idea of “willing listeners” to rule against hecklers and against politicians who serve the purposes of hecklers. The bottom line is: The police can’t just stand there and allow speakers to be drowned out by a mob—which is what occurs at almost every one of these gatherings. (The sole exception may be the gathering last April in Pikeville, Kentucky, of three Alt-right groups—the National Socialist Movement, the Traditionalist Workers Party, and the National Front. Since there were 125 protesters and 150 counter-protesters—the closest to parity any of these events have achieved—the police were able to establish a reasonable degree of order.)

In all the other examples I could cite—Berkeley, Portland—city officials let a rally begin, make sure the opposing sides are separated, cut it off for public safety reasons, then congratulate themselves.

This is not what the case law requires.