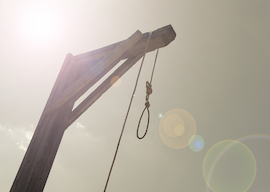 In the days when there was still capital punishment in Britain, the prison doctor had to certify a man fit for execution before he could be hanged. What fitness for execution consisted of, I am uncertain: It was a concept that was inadequately taught in medical school.

Presumably fitness for execution had nothing to do with the guilt or innocence of the man to be executed, or his moral desert; that was hardly a doctor’s business. It could hardly have had much to do, either, with his physical fitness; you wouldn’t postpone an execution just because of a cold or a touch of osteoarthritis. Apart from anything else, executions, like trials, require coordination and are difficult and expensive to arrange.

I think the main medical requirement of fitness for execution must have been sanity. You couldn’t hang a lunatic; that wasn’t cricket, so to speak. I think that if I had been a prison doctor in those days, as I was to be later, I should have diagnosed every condemned man as suffering from a condition that unfitted him for hanging. There are now so many diagnoses to choose from that practically everybody has one—at least one, often more. Indeed, if you are fit for hanging there must be something wrong with you.

Anyway, sanity was an odd criterion for fitness to be hanged. Why should a lunatic—assuming that he was sane at the time of his capital crime—escape hanging? It could hardly be because, in his state of mind, he could learn nothing from the experience, since being hanged is not a learning experience like, say, attending a lecture, at least not unless you believe that a man is reincarnated after his death and furthermore remembers things from his previous life, an opinion held mainly by cranks who claim to have been someone famous in a prior existence.

“I am against the death penalty because, no matter how scrupulous the legal system by which it is imposed, innocent people are executed.”

Fitness for execution was luckily not a diagnosis I ever had to make, but the other day I was rootling round amidst the piles of books that make it so difficult for people (including me) to reach the desk in my study when I came across a paperback with yellowing pages published as long ago as 2008 which the title Texas Death Row: Last Words, Last Meals, Last Rites, a book that, once opened, exerts a strange fascination. It recounts the crimes, and the last meals and statements, of the 391 people executed in Texas by fatal injection in the quarter century between 1982 and 2007.

I am not against the death penalty because it is unjust; indeed, as you read of some of the crimes committed by the 391, albeit in a filleted version of 200 words, you come to the conclusion that capital punishment is the only just and fitting punishment for the persons who committed them. Nor am I against the death penalty because it is ineffective as a deterrent; I found evidence in England that it was effective. However, efficacy in deterrence is not by itself a sufficient justification of a punishment. Public execution of those who park illegally would deter illegal parking, but we (most of us, at any rate) would not advocate it.

I am against the death penalty because, no matter how scrupulous the legal system by which it is imposed, innocent people are executed. A disturbingly high proportion of the 391 in the book claimed in their last statements, on what amounted to their deathbeds, to be innocent of the crimes with which they were charged. No doubt illogically, it has long been the tradition that the testimony of a man on his deathbed can be entered in a trial without cross-examination. This, of course, does not make such testimony true; even minutes before his certain death, a man may have a motive for lying. Still, if only a few of those who claimed to be innocent actually were innocent, as seems to me likely given that quite a number of men on death row have been exonerated even after many years, this is a dreadful thing.

No doubt intended to appeal to our infinite taste for sensationalist voyeurism, this book is unexpectedly rich not so much in lessons it teaches as in the thoughts it provokes. The average length of time spent on death row by the executed was about ten and a half years, ranging between seven months and 24 years. To some, this might indicate the scrupulosity of the legal system, but to others its incompetence and lack of confidence in itself, or perhaps even its corruption. And my first reaction to such a system, that can keep a man for a third of a normal life span fearing that he will be put to death but not knowing when, is that it is as cruel as a cat playing with a mouse, and without the cat’s excuse of not being a moral being. If a sentence of death cannot be carried out without the legal system being confident within a relatively short time of its passing that it is right and just (or alternatively that it was not right or was unjust), then no such sentence should ever be passed in the first place, irrespective of all other considerations of the ethics of the death penalty.

And yet, strange to relate, many of the last statements of the condemned men (there were only two women among them; perhaps a pressure group for sex equality in execution could work to equalize this gross and self-evidently unjust disparity) suggested that, in their long years on death row, they had changed in character much for the better. “Depend upon it, sir,” said Dr. Johnson, “when a man knows that he is to be hanged in a fortnight, it concentrates his mind wonderfully”—and, as usual, he was right, at least in essence. Only in a few cases were the self-acknowledged killers unrepentant, and since their protestations of repentance could do them no good, at least in this world, they might be accepted as genuine. Where expressions of repentance bring an earthly reward, such as release from prison, their sincerity remains in question.

Is the fact that vicious murderers who have committed the most terrible crimes can change for the better a cause for optimism or pessimism? Both, I suppose: It is good that many of even the worst people should be capable of change, but bad that it should take the prospect of their own death (or a very prolonged time) for them to do so.

The last meals ordered by the condemned men were revealing. I don’t know, of course, how wide their choice was; whether, for example, if they had ordered oysters or asparagus their wishes would have been complied with. But for the most part, they ordered double cheeseburgers with strawberry milkshakes and the like, so much so that I couldn’t help wondering whether it was the diet of junk food that caused them to become criminal (or is it that criminality predisposes to junk food?).

I could not help but admire the Texan, though, who, after his last meal on earth, said, “My compliments to the chef.” I was reminded of Dr. William Palmer, known as the Prince of Poisoners, who, on approaching the rickety, hastily erected scaffold on which he was to be hanged in 1856 before a crowd of 30,000 in front of Stafford gaol, turned to the executioner and asked, “Is it safe?”