Flinging Poo at a Jew 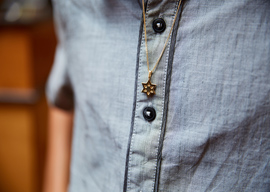 As a child, the thing I found most startling about attending majority-black public schools was the fact that most of my fellow students had no idea what a “Jew” is. To them, I was just a white kid. A few of my schoolmates who had churchgoing parents had heard terms like “Hebrews” and “Israelites,” but there was little understanding of how those words applied to living people in the modern world.

I recall one black classmate telling me she’d finally “figured out” what this Jew thing is all about: “You guys just wear the cross, but without the little man on it, because you don’t think Jesus is the savior. But we Christians wear the little man because we believe in him.”

Bless her heart, at least she tried.

About 24 years later, in 2007, my old friend and constant irritant Bradley Smith, the Holocaust-denying drunkard, was living in a slummy part of Rosarito, Mexico. In a rare case of reverse chain migration, Bradley and his wife, a Mexican national, had fled the U.S. to live on some property the wife’s family owned. Bradley loved the slums of Rosarito because nobody gave a damn that he was a Holocaust denier. Because nobody cared about Jews and their grievances. Bradley’s Mexican drinking buddy was a professor at a Tijuana college (I forget the name of it…it was either ¡Ay Chihuahua! U or Cheap Fentanyl Tech). The professor was putting together a film festival in coordination with some San Diego schools. It was going to be a cross-border, cross-cultural celebration of filmmaking. Knowing that Bradley sold videos (the ones I’d produced in the early ’90s), the prof asked if he would like to enter something in the festival.

To his credit, Bradley warned the guy: “If I submit a film, it’ll be a Holocaust revisionist film, and you’ll get a lot of flak from Jews.” El Profesor laughed it off. “Why would these ‘Jews’ be mad? If it’s a good movie, I’m sure they’ll appreciate it as we do.” So Bradley asked me if I could whip up a 30-minute film in under a week, which of course I could. I put together a documentary about the criminalization of Holocaust revisionism (you can view it here). The professor loved the movie, and he gave it a prime screening slot.

“This Jewish delusion of being among the ‘99 percent’ is what compels Jews in the West to promote suicidal policies.”

What no one saw coming was that there I was, on the civilized side of the border, in my guise as David Stein the respectable Holocaust guy, calling every Jewish organization in the U.S., alerting them that this Mexican festival was about to premiere a “denial” film (which it actually wasn’t, but hey, gotta rile the mob). The ADL took the bait and raised hell. The festival’s San Diego cosponsors pulled out and released a groveling apology, the U.S. advertisers fled, the American VIP guests went home in a huff, the professor was officially reprimanded by his superiors, Bradley lost his drinking buddy, and, for having sounded the alarm, “Stein” won the trust of the Jewish orgs (and I was able to put that goodwill to good use when promoting my “mainstream” Holocaust films).

I have a fondness for anecdotes in which everyone ends up losing except Dave, but that’s not why I recounted that story. The point I wanted to make is that if you’re a typical American Jew, the gentiles in your life almost certainly know what a Jew is, and they’re properly respectful. Jews don’t like moving in circles where that’s not the case. And frankly, I think that’s a mistake. Whether it’s spending time in the darkest corners of inner-city black America, or in a Mexican slum, every Jew needs the occasional reminder that to a lot of people in the world, we’re not just “nuthin’ special,” we’re worse—we’re white.

The average Jew can do an hour of stand-up comedy on the differences between Jews and white gentiles, so there’s no greater shock than finding out that people in the parts of the world we don’t care about see little difference between us and the goys.

This is a lesson Asher Shalom learned the hard way last month. Shalom, an Israeli-born businessman, was all set to open a new kosher café in the L.A. neighborhood of Boyle Heights. I’ve written about Boyle Heights before. It’s a Latino ghetto where the residents routinely use violence to prevent “gentrification” by white interlopers. And here was Shalom, as Jewy a Jew as ever Jewed a Jew, assuming he’d get the welcome wagon as a “fellow minority.”

Welcome wagon? More like smellcome wagon, as neighborhood brown folks pelted the café with feces to prevent the grand opening. To these poo-flinging ninnies of Guanojuato (yes, I know, second bad pun in as many sentences), Shalom was just another white invader.

There’s a myth that Jews tell themselves, and I’d go so far as to say that it’s a myth of such monumental importance, it influences not just Jewish behavior, but world events. It’s the myth that Jews are part of the “disenfranchised.” On one side is the “white Christian power structure,” and on the other side, the “outsiders” (blacks, Latinos, Muslims, gays, lesbians, trannies…and Jews). This is the guiding myth that informs the actions of Jewish leftists. They see themselves as partisans fighting the empire, and they’ve convinced themselves that their fellow partisans see them that way too. It never occurs to them that to the genuinely “dispossessed,” Jews are viewed as part of the empire.

Last week, in a piece that can only be described as preternaturally stupid, the Forward’s deputy life and features editor—a screeching fetus named Jenny Singer—described American Jews as a “marginalized community.” That’s sheer schizophrenia. That’s “you need medication for those hallucinations”-level insanity. Singer’s piece was about how Jews must act in solidarity with their fellow “oppressed” Americans. Looking at her Facebook photos, I can say without hesitation that my old high school chums would have dismissed her as just another white chick. But I can imagine her in college, in a study group with a few nonwhite friends (her pricey all-female alma mater usually hovers around 5% black enrollment, but I’m sure she sought a few of them out, for “kinship”), kvetching about how “Oy, us mawginalized people need to stick together. Oy, the mawginalization! Enough with the mawginalization already! Let’s rise up, my mawginalized sistahs!”

Jen-Jen, I hate to break this to you, but every time you’ve crowed to a black or brown friend about how you’re “one of them,” that person was silently despising you. Oh sure, they may have been smiling politely, but that’s only because, inside, they were imagining beating the shit outta you, and they found the thought pleasing.

The truly “marginalized” generally see Jews one of two ways—as run-of-the-mill white (with all the “privilege” they claim comes with the color), or as super-white, the one percent of the one percent, the richest of the rich…the whites that other whites bow down to.

But they don’t see us as marginalized nonwhites.