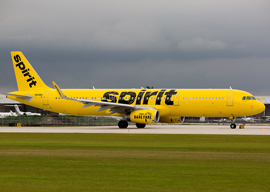 I was reminded of this while enjoying my second of three airport meals—in three different airports—during my attempt this week to fly from Austin to New York. I had plenty of time to think about it because my Barbacoa Quesadillas were delivered so fast at the Mexican restaurant next to Concourse C that I briefly suspected they had been flash-microwaved in one of those laser ovens like astronauts use. In fact, judging by the consistency of the pico de gallo . . .

But I digress, and anyway, I deserved it, due to the first principle of modern airlines:

Bondage: At the Douglas Airport in Charlotte, I’m in the position of Stage 2 Bondage, the sort of imprisonment that occurs whenever there’s a “weather event.” They never tell you just exactly what the weather event is—it could be hail, locusts, volcanic ash dispersal, or, more likely, rain showers in Newark—but it causes “disruptions in the system” that lead to massive delays, cancellations, and guys in plaid jackets screaming “This is outrageous!” I don’t know why there’s always a man in a plaid jacket screaming at a gate agent, but it’s clearly because he doesn’t understand that, by purchasing an airline ticket, he has become a bondservant. (I’ve mastered the silent scream, by the way. This is the process of watching your cell phone app repeatedly rebook your canceled flight, teasing you with a new way to get to JFK via Denver, only to then cancel that flight as well and reward you for good behavior: If you’ll just go to a hotel and agree to fly tomorrow, you get 50 Frequent Flier miles!) The last leg of my journey, which was supposed to be Charlotte to Newark, became Charlotte to White Plains, Charlotte to Philadelphia to Newark, Charlotte to Chicago to La Guardia, and, finally, Charlotte to Columbus, Ohio, where they were out of nachos at the only restaurant still open in the middle of the night (but, happily, not out of Balvenie 17-year small batch), followed by one of those flights into a ghostly La Guardia where there are so many “lost” bags that they have to pile them out on the tarmac.

But that’s the secondary form of bondage. The first time you’re placed into restraints is more straightforward. Only on airplanes are you strapped in like a prisoner and repeatedly warned that if you violate any of the penitentiary rules—failing to stow your tray table, unbuckling early, refusing to give up your hand luggage—you will be verbally thrashed and, if you persist in being a rebel, handed over to the gendarmes, some of whom are conveniently located on board.

Discipline: Anyone who rides on long-distance buses knows that the Greyhound and Trailways experiences have been trending towards larger seats, more comfortable seats, head rests that actually rest your head, free wi-fi that works 100 percent of the time, foot rests, leg room, and almost no announcements.

Airlines start off with a lengthy announcement full of legalese that is so unnecessary they seem to be taunting you:

“Smoking is forbidden on this flight, and disabling the smoke detector in the bathroom is a federal crime.”

This particular announcement should be followed by, “Could we have a show of hands? How many of you remember that last smoke-detector trial in federal court? The one where the guy got three years in solitary for messing with the equipment on the Boise to Tucson flight?”

We all know you can’t smoke on the plane! We’ve known this since the 1990s! We don’t need to be told this anymore!

This is pretty much standard prison procedure: let’s remind them of where they are.

But that’s not good enough for them. The third element of airline travel—the “S” in BDSM—is Sadism.

Sadism is things like the pilot’s announcement that “I’m going to turn off the seat belt sign—feel free to get up and move around.”

Walk sideways down the center aisle and do a handstand on the food cart to get to the galley?

It’s like saying to a condemned man, “I’m gonna take off the cuffs right before we kill you.”

But they have even more subtle forms of Sadism, such as never answering their phone.

They give you a Customer Assistance number and then don’t answer it. They even have a recorded message that says you have two choices—listen to The Nutcracker Suite for the next 30 minutes, or let a machine dial you back when they’re good and ready to listen to your blather. If you do choose to stay on the line, they’ll keep suggesting that you “go to our website”—the one that has already failed to answer any of your questions while 10,000 other people are trying to rebook flights, the one that keeps canceling your own rebooked flight, and the one that refuses to provide boarding passes for inmates like yourself.

The one thing the website can do very well, though, is track your luggage as it embarks on adventures of its own at airports all across the country. (Mine ended up in Pittsburgh.) But they usually don’t reveal exactly where the bag is until they’ve watched you wade through the thousand random suitcases that are piled up like mismatched Lego blocks next to the carousel that delivered them several hours ago to someone else’s wrong destination. This is especially fun at La Guardia, which has that Third World feel, so the whole baggage area is full of gypsy cab drivers who look like they’re ready to make off with any random bag that comes into view.

Masochism: We know the price on Expedia is not the whole price—there are hidden fees out the wazoo—but we click on it and make that reservation anyway, don’t we?

Everyone hates Spirit Airlines. Spirit, based in Fort Lauderdale, is an especially intense American version of the budget-traveler European short-hop carriers like RyanAir, Jet2, Primera Air, Elinair. I’ve flown them all, and I’ve elbowed my way through that Birmingham airport that’s sort of the ultimate dungeon of duty-free stores and food courts and backpackers. Most of these airlines use six-across Boeing 737s and load you up with hidden charges, but Spirit decided to reduce it to a science.

For example, a carry-on bag on Spirit—not a checked bag, but a bag you lug around—costs $35 per flight, but only if you declare it during the booking process. If you wait until you’re getting your online boarding pass, that fee goes up to $45. If you wait until you get to the reservation desk, it’s $50. Of course, that’s much cheaper than checked bags, which start at $45 and go up to $100, depending on when you check them.

Wanna sit next to the person you’re traveling with? That can cost you up to $50.

Want the gate agent to print out a boarding pass? You should have done that at home, because now you’re gonna have to pony up $9.

These people even charge for water, pretzels and coffee.

And if your flight gets canceled, and you’re on Spirit, and the next Spirit flight to your destination doesn’t leave for two days, you wait two days.