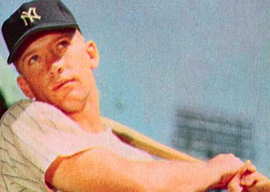 NUEVA YORK–The dateline is in Spanish because I have yet to hear any English spoken here in the Bagel, and I landed in some style more than 24 hours ago.

Never mind. Flying at 47,000 feet at close to 500 knots per hour on a G550 is as close to perfection in traveling as it gets. The G550 is the Mozart / Beethoven / Schubert / Schumann / Edward Hopper / Degas / William Holden / Burt Lancaster / John Wayne / Papa Hemingway / F. Scott Fitzgerald / Lew Hoad / Roy Emerson / Robert E. Lee / Hasso von Manteuffel of airplanes. There, you get my point, dontcha? Way up there, close to the angels, there ain’t no turbulence, the plane glides like a giant bird, and silently to boot. And it still has tricks up its sleeve. The cabin is pressurized at 3,000 feet, a bit like lunching up at the Eagle Club, whereas the peasants are pressured at 9,000, where throats get dry quicker than a Bill Clinton lie, pregnant women are known to give premature birth, and drink gets the better of men and women of the lower persuasion.

“Americans believe in computers bossed by humans. Europeans have humans under orders to computers.”

Two American ex-fighter pilots and a Greek engineer are in the cockpit. Two very pretty ladies serve us lunch, dinner, and fine red wine. We read the papers, and before we know it we’re over land and closing down on a Statue of Liberty, which is shining in glorious color as the sun sets in the west. We’re up over West Point and follow the Hudson south down to Westchester Airport, open to private planes only, natch.

My host had me sit up in the cockpit as we first crossed the American coastline. What struck me about the G550 instrument panel was its simplicity. There is even a three-dimensional map which can guide the plane around forests, hills, and tall buildings if need be. Americans believe in computers bossed by humans. Europeans have humans under orders to computers. Ergo the Air France accident which dropped the Airbus into the ocean off Brazil. “You did that on purpose,” I teased the captain as he landed it manually and came to a dead stop without the reverse thrust within 250 yards. Now that’s what I call flying with a capital “F.” (As well as, pun intended, the high life). The next time any of you has fifty million big ones lying around, do order a G550. Tell them Taki recommends it highly; it beats flying easyJet.

But nothing lasts forever. My good mood ended as soon as I settled down with a large vodka and ice to watch a baseball game, now at season’s end getting down and dirty. The Yankees are in a dead heat with Baltimore, a team with less than half the Yankee payroll but one that has managed to match them with guile, pluck, intelligence on the field, and lack of arrogance off it. There is nothing like a baseball game in the closing days of the season in wonderful autumn weather between two teams that are dead even after 142 games—at least not for me, who can rattle off the lineup of the great 1949 Yankee team, and a friend of the greatest Yankee ever, Mickey Mantle, now batting up at that great diamond in the sky.